This was it. The race that would decide whether Usain Bolt, the fastest man the world has ever seen, would become a legend -- according to the Jamaican sprint star himself. 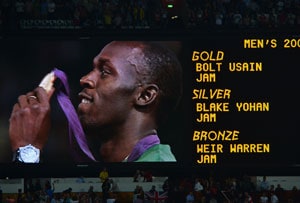 This was it. The race that would decide whether Usain Bolt, the fastest man the world has ever seen, would become a legend -- according to the Jamaican sprint star himself.

And the 25-year-old delivered in his own inimitable style, lighting up the London 2012 Games once again to fulfil his own prophecy.

Taking the race in 19.32sec, Bolt had the Olympic Stadium crowd on their feet to hail the track king.

The 80,000 spectators were already in party mood before the showdown, with Mexican waves sweeping round the arena as they waited for the night's star attraction.

While the giant screens showed the triple jump final, the huge cheer that erupted a few metres beyond the sandpit and the myriad twinkling camera flashes told the tale that Bolt had entered the building.

The sun having set 20 minutes before, the stadium's crown of triangular floodlights were now on full beam.

Pounding strings told the stadium it was 8:55 pm -- showtime.

Introduced to the crowd, Christophe Lemaitre wiped his lips, blinked and stared at the floor. Alex Quinonez shook his head at the camera. Yohan Blake lived up to his nickname of "The Beast", performing his scary fingers routine, like an extra from Michael Jackson's "Thriller".

Churandy Martina wagged his finger at the camera and gave himself a quick round of applause. Wallace Spearmon pointed to the USA written across his chest.

Then came Bolt. He waved his hand like a royal on autopilot and gave a double finger point down the barrel of the camera as the decibel level went through the roof.

Compatriot Warren Weir rubbed his hands together and Anaso Jobodwana, in the outside lane, just looked nervous.

The thudding sound of a heartbeat played over the speakers.

Blake looked up and around. Bolt appealed for quiet, putting his fingers to his lips and Bolt gave one last point skywards.

The pregnant hush hung heavy. The whirring sound of the blimp overhead could be heard, for the first time.

As Bolt and his compatriot Blake pulled clear on the bend, the sense spread that this was something special.

And within seconds, Bolt made sure he made history.

Turning to look at the clock and putting his finger to his lips as he crossed the line, Bolt ran beyond the thick white stripe and into realm of legends, slapping his chest as he went.

Clearly with plenty of energy left in the tank, the playful star got down and did some press-ups before hugging Blake, as close a friend as he is a rival.

Bolt grabbed a Jamaican flag and set off on his victory lap, burying his head in the crowd as fans reached out to touch their hero.

A wave of excitement followed him around the stadium, accompanied by fans chanting "Usain! Usain! Usain!".

When he completed his lap, Bolt got down on his knees and kissed the finish line, then drew himself up and did his trademark 'Lightning Bolt' pose, pointing at two official timekeepers in red jackets.

Even the officials who clocked his sprint into legendary status could not help but give him a round of applause in return.