Usain Bolt declared himself the greatest athlete of all time on Thursday after storming to victory in the Olympic Games 200m to seal an unprecedented second successive sprint double. 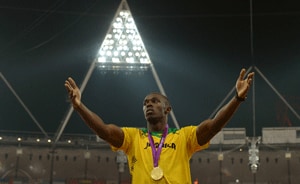 Usain Bolt declared himself the greatest athlete of all time on Thursday after storming to victory in the Olympic Games 200m to seal an unprecedented second successive sprint double.

Bolt came to London facing questions over whether he was still the alpha male of the sprinting world after twin defeats to Yohan Blake in the Jamaican trials.

But the 25-year-old, who retained his 100m title on Sunday in the second fastest time ever, emphatically silenced his doubters on Thursday, crossing the line in the equal fourth fastest time of all time of 19.32sec.

"It's what I came here to do. I'm now a legend, I'm the greatest athlete to live," said Bolt, who led a Jamaican clean sweep of the medals, ahead of Blake and Warren Weir.

"I did what I wanted," Bolt said. "I came out of a rough season and I did what I had to do. I've got nothing left to prove. I've showed the world I'm the best. It's wonderful. Jamaica has proven that we are the greatest sprint country."

Bolt, the 100m and 200m champion at the Beijing Games in 2008, has now eclipsed the record of US track legend Carl Lewis, who won three golds and a silver in the sprints at the 1984 and 1988 Olympics.

Bolt showed less of his crowd-pleasing antics than usual and was subdued in the moments before the race when palpable tension gripped the crowd waiting to witness his coronation.

He pointed skywards before setting himself and as he rounded the bend, Blake briefly threatened but Bolt was not to be denied.

With teeth clenched, eyes on the big screen and at full tilt, Bolt had enough of a lead to slow down a full 10 metres from the line, raising his finger to his lips as he did so.

When Bolt took to the track the atmosphere was still crackling after Kenya's David Rudisha had set a stunning world record of 1min 40.91sec in the 800m.

The 23-year-old world champion was five metres clear of Nijel Amos of Botswana after taking control of the race from an early stage and charged down the home straight at the capacity crowd rose to their feet.

"To come here and break the world record is something unbelievable," said Rudisha.

When asked whether he was the greatest 800m runner in history, he added: "Yeah, I'm still running so I believe I'm going to maintain it for a couple of years. I want to become a legend in 800."

His performance won rich praise from London Games chief organiser Sebastian Coe, whose world record in the 800m set in 1981 lasted for 16 years.

"Rudisha's run will go down in history as one of the greatest Olympic victories," said Coe.

Seven of the eight finalists set personal bests -- Briton Andrew Osagie's eighth-place time of 1:43.77 would have been good enough to win gold in the 2008 Olympic final.

Also Thursday, American world champion Christian Taylor won triple jump gold with a leap of 17.81m and Barbora Spotakova of the Czech Republic retained her javelin title with a best effort of 69.55m.