Former 100 metres world champion Kim Collins was axed from St Kitts and Nevis's Olympic squad on Saturday after an apparent row over visits to see his wife. 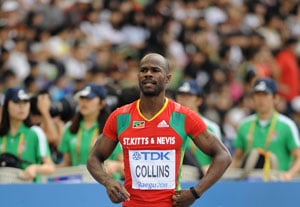 Former 100 metres world champion Kim Collins was axed from St Kitts and Nevis's Olympic squad on Saturday after an apparent row over visits to see his wife.

The 36-year-old -- who despite his age won 100 metres bronze at last year's world championships -- was disciplined for repeated absences from the squad's training camp, a statement said.

Collins later claimed he had been angered by his team chiefs' refusal to allow his wife to visit him.

"Even men in prison get their wives to visit," the 2003 world 100m champion said, vowing never to run for his country again.

"I should stay in a hotel with my wife with or without their permission, that's honest to God truth whether they like it or not," he told the BBC.

"This is how it ends. It ends on a really sad note. I should have been allowed to run. I don't see what is the big deal.

"People treat me like this. They cheated me. I earned my right to be here but they took it away from me."

St Kitts and Nevis' National Olympic Committee said in a statement the veteran sprinter had been sacked because of "repeated absences."

"Mr. Collins departure is down to his repeated absences from training sessions and also for refusing to respond to repeated phone calls and emails by Team Manager and Coaches.

"Furthermore Mr. Collins did not make an appearance for registration for his events at the Olympic Village yesterday as requested.

The St Kitts NOC said that it was a cause for some sadness that the 2002 Commonwealth Games champion would be missing.

"As a local hero to all Kittitians and Nevisians, an international sports star and former 100m champion, Mr. Collins absence will be greatly missed by the whole nation and of course the entire team here in the UK, management and coaches who have worked with Mr. Collins in the lead up to the Games."