South African Oscar Pistorius made history on Saturday when he became the first double amputee to compete in an athletics event at the Olympics. 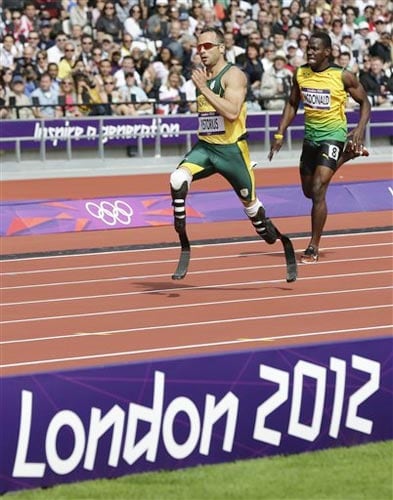 South Africa's Oscar Pistorius made history on Saturday when he became the first double amputee to compete in an athletics event at the Olympics.

The 25-year-old qualified for the semi-finals of the 400 metres by running a season's best of 45.44 seconds in finishing second.

Pistorius, who had both legs amputated below the knee before he was aged one, because of a congenital condition, runs on carbon fibre blades.

Pistorius, known as the 'Blade Runner', competed in the Athens 2004 and Beijing 2008 Paralympics.

But he was given the green light to make his debut in the Olympics following studies that found his prosthetics give him no advantage over his able-bodied rivals.

His personal best is 45.07sec in the 400m and Pistorius came to London wanting to break the 45-second barrier.

"When I found out I had made the team, a certain pressure left and another pressure came in," he said prior to the Games.

"It hits you when you're standing on the starting blocks. At Athens and Beijing, that's when it really dawned upon me."

He is clear to compete on condition he uses the same prosthetic legs that have been used in Paralympic sport since 1996.

Pistorius said exhaustive tests had proved that running on blades gave him no advantage.

"If I had to listen to the five percent of negativity, I wouldn't be here," he said. "If I have such an advantage, why isn't everybody else running the same times?"

Pistorius -- 13 kilogrammes lighter than he was in Beijing -- said he had no worries about competing in both the Olympics and the Paralympics, where his 89-year-old grandmother will be coming to watch him.