South African 800m runner Caster Semenya is scheduled to make her Olympic debut on Wednesday, confident that her controversial victory in the 2009 world championships is a thing of the past. 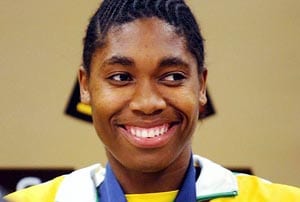 South African 800m runner Caster Semenya is scheduled to make her Olympic debut on Wednesday, confident that her controversial victory in the 2009 world championships is a thing of the past.

The 21-year-old - who is coached by 2000 Sydney Olympics 800m champion Maria Mutola from Mozambique - had to undergo drug tests followed by gender tests following that magnificent victory in Berlin.

The situation spiralled out of control with Semenya complaining of "unwarranted and invasive scrutiny of the most intimate and private details of my being".

She was barred from the track for almost a year before being cleared to run again and her comeback was hampered by a lower back injury and a growing belief that coach Michael Seme had taken her as far as he could.

However, she said on the eve of the Games: "That is in the past.

"With each year I experience I become a more relaxed athlete. I also know what is important to listen to and what to ignore.

"I try to run my best always but sometimes I do not and I have to deal with negatives. People ask questions that can make you sad, but I must always stay positive.

"That's what I have to learn. I have to act professionally. But this is my first Olympics so it'll be special for me."

Semenya will face a tough test from Kenyan nemesis Pamela Jelimo, the defending Olympic champion who has bettered in five races the South African's season's best time of 1min 59.18sec.

Wednesday promises to be another mouth-watering feast of athletics at the Olympic Stadium, the 80,000-capacity of which has been a sell-out since the programme got under way.

Providing there are no slip-ups in the heats, Chinese athletics icon Liu Xiang will be on the track, determined to erase memories of his traumatic experience at the Beijing Games and regain his 110m hurdles Olympic title.

He has, however, shown some of his old form, and was desperately unlucky not to win the world title last year, being hindered twice by world record holder Dayron Robles's trailing arm, which led to the Cuban being disqualified from gold with Liu being bumped up to silver.

Jamaican Shelly-Ann Fraser-Pryce will be seeking a sprint double in the women's 200m, likely up against teammate and two-time Olympic champion Veronica Cambell-Brown and American Carmelita Jeter.

The two other finals to be contested will be the women's 400m hurdles and the long jump.

He is the in-form competitor, having set a new record of 9,039 points at the US Olympic trials in Eugene, Oregon, last month, breaking Czech Roman Sebrle's old mark from 2001 by 13 points.

He had already set the indoor heptathlon world record in Istanbul in March, following a silver medal showing at the 2011 world outdoors in Daegu, South Korea, where he finished behind compatriot Trey Hardee.