The Bahamas shattered the United States' decades-old dominance of the 4x400m relay here Friday, storming to victory on the final leg to snatch a dramatic gold. 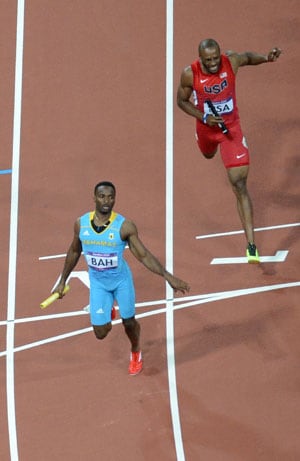 The Bahamas shattered the United States' decades-old dominance of the 4x400m relay here Friday, storming to victory on the final leg to snatch a dramatic gold.

It was the first time an American team contesting an Olympic 4x400m relay final had been beaten since the 1972 Munich Games.

The United States took silver in 2:57.05 while Trinidad and Tobago took bronze in a national record of 2:59.40.

Double amputee Oscar Pistorius's hopes of a historic medal never looked likely as South Africa, who had only reached the final after appealing when they failed to finish their heat, finished eighth and last.

Taylor, 33, was unable to find the required speed and stamina and missed out on a fourth Olympic title, having won two 400m hurdles titles and the 2008 4x400m relay gold.

Miller, 25, said that this moment had been coming.

"The US guys know we've been just behind them or thereabouts for a long time, but it's amazing we are finally taking home the gold," said the 2010 Commonwealth Games individual bronze medalist.

"This is for everyone back home. We can't wait to celebrate."

For their 33-year-old veteran Chris Brown it meant a second relay gold to go with the world championship he won 11 years ago but since then he has only experienced frustration picking up several minor medals.

"It's great to bring home the gold. We really ran well. I trusted in these guys to finally beat the Americans."

Comments
Topics mentioned in this article
Athletics United States Olympics 2012
Get the latest updates on ICC T20 Worldcup 2022 and CWG 2022 check out the Schedule, Live Score and Medals Tally. Like us on Facebook or follow us on Twitter for more sports updates. You can also download the NDTV Cricket app for Android or iOS.