In a country where world champions are a rarity, five-time boxing world champion M.C. Mary Kom always had to shout for recognition. But all that will hopefully change now after she has added another feather to her cap - an Olympic medal. 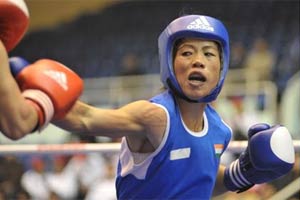 In a country where world champions are a rarity, five-time boxing world champion M.C. Mary Kom always had to shout for recognition. But all that will hopefully change now after she has added another feather to her cap - an Olympic medal.

Mary Kom's journey to the top of women's world boxing has been an arduous one. With all she has done for the sport, very few people have acknowledged her feats.

The diminutive 29-year-old from Manipur created history by becoming the first Indian woman to win an Olympic medal in boxing.

A woman boxer from India would seem like fiction to many. However, Mary Kom transcended the gender boundary by becoming the best at what she does.

Inspired by famous Manipuri boxer Dingko Singh, an Asian Games gold medallist, Mary Kom gave up books for boxing gloves. But she had to hide her interests from her family. All that changed after her victory in the Manipur state women's boxing championship in 2000.

If growing up in the strife-torn state of Manipur was hard, the road to the London Games was harder. But when the going gets tough, the tough get going.

In the inaugural 2001 World Championship, she won the silver and her golden run started in 2002. In 2003, Mary Kom was awarded the Arjuna Award.

The Manipuri fighter vented out her anger after she was ignored despite winning the world title for the record fourth consecutive time in 2008.

M.S.Gill, the then sports minister, intervened and assured her that justice would be done. Finally, Mary Kom got the Khel Ratna along with Beijing Games bronze medallists Sushil Kumar and Vijender Singh.

Being a police officer in Manipur, she had to do her job, find time and opponents to practice, and then hunt for funds to build up international experience.

After her success, Mary Kom married K. Onler Kom and had twin sons, Rechungvar and Khupneivar. Not only does she have to lend emotional support to her young family but financially she is the main source of income.

Her husband Onler also played a crucial role in her growth and time and again Mary Kom has given him all the credit. He had to stay at home and cater to their twin sons while Mary Kom travelled the world trying to bring laurels.

After a two-year sabbatical that saw her start a family, Mary Kom came back strongly to win the World Championship twice.

After the news of inclusion of women's boxing in the Olympics for the first time, Mary Kom had to make a huge change, going to 51kg category from the 46kg class, where she has fought for most part of her life.

Life finally came a full circle as she got the Olympic medal she so richly deserved.

Comments
Topics mentioned in this article
Boxing India Olympics 2012
Get the latest updates on ICC T20 Worldcup 2022 and CWG 2022 check out the Schedule, Live Score and Medals Tally. Like us on Facebook or follow us on Twitter for more sports updates. You can also download the NDTV Cricket app for Android or iOS.