Disappointed they might be after the second-round exit from Olympics but veteran Indian tennis star Leander Paes said he and his unheralded Vishnu Vardhan played "one hell of a match" against the fancied French combination of Michael Llodra and Jo-Wilfried Tsonga. 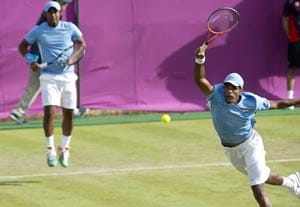 Disappointed they might be after the second-round exit from Olympics but veteran Indian tennis star Leander Paes said he and his unheralded Vishnu Vardhan played "one hell of a match" against the fancied French combination of Michael Llodra and Jo-Wilfried Tsonga.

Paes and Vardhan lost 6-7(3), 6-4, 4-6 to Tsonga and Llodra in the men's doubles second round last night in a gruelling contest that lasted over two hours.

Paes, who teamed up with Vardhan after being rejected by both Mahesh Bhupathi and Rohan Bopanna in a bitter selection row, lauded his inexperienced partner's fighting spirit.

"Being the first time that we have played together as a team, we've played a hell of a match again. Our first-round match was against some really tough opponents with one player No.33 in the world in singles (Robin Hasse) and the other No.21 in doubles (Jean-Julien Rojer), and we managed to beat them," Paes said.

"Today it was tougher. We had Tsonga who is No.5 in the world for singles and Llodra who is a multiple Grand Slam champion.

"I have to commend this guy Vishnu he's got a big heart and I've had such a thrill playing with him. He's a phenomenal competitor and he's got big stature as far as physique and things go and that is what champions are made of," he added.

Paes said he was satisfied with the duo's performance despite an early exit.

"Today we came up one or two games short against a formidable French team, but I was just talking to Vish during the match and saying 'can you imagine a third or fourth match playing together?' We have a lot of firepower but there are still a few things that we have to improve on. We have a big game and I'm very happy about that," he said.

Asked to reflect on the state of Indian tennis, which was rocked by a massive selection row just days before the Games, Paes said, "As far as Indian tennis goes, this last week has been a little bitter-sweet as far as our team goes. Bitter because I have won the championships here five times and we went down today.

"Sweet because I think that we've found a great talent here. I've always known that Vish is talented and on the world stage he is going to perform.

"Now we really have to nurture this talent. With a little experience, can you imagine? We've really rattled the No.5 singles player in the world and a multiple doubles grand slam champion today."

Vardhan, meanwhile, credited his good performance to the effort put in by Paes ahead of the Games.

"Lee and his team have been working on me for the last month and a half. It's not just an overnight thing. We've spoken about strategies and tactics and then the game-plan last night and I cannot thank him enough.

"He is an amazing leader and this is how a champion is. This is a great opportunity for me to play with someone like Leander and this is by far the best match ever. I have no words," he said.

On his future plans after the big Olympic break, Vardhan said, "I've focused equally on both singles and doubles, but in the last month and a half we have been working hard on the doubles game and it's coming along great.

"What Leander Paes has been doing is great, working on my game. For the last 18 years of tennis what have I learned? I feel I've learnt more in the last month and a half. I'm very happy about it."

Comments
Topics mentioned in this article
Tennis Olympics 2012 India Leander Paes Vishnu Vardhan
Get the latest updates on ICC T20 Worldcup 2022 and CWG 2022 check out the Schedule, Live Score and Medals Tally. Like us on Facebook or follow us on Twitter for more sports updates. You can also download the NDTV Cricket app for Android or iOS.