Poovamma gave India the first gold of the day by clocking 52.97 secs in women's 400m race, a shade below her 52.75 sec effort which had fetched her a gold at Federation Cup National Athletics Championships at Patiala last month. 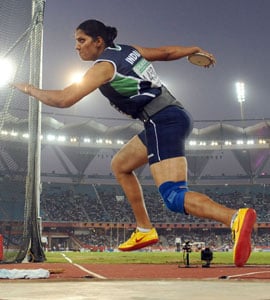 Indian athletes produced an impressive performance by bagging 11 medals, including four gold, in the first leg of the Asian Grand Prix series here on Saturday.

Poovamma gave India the first gold of the day by clocking 52.97 secs in women's 400m race, a shade below her 52.75 sec effort which had fetched her a gold at Federation Cup National Athletics Championships at Patiala last month. She had also won gold in the same event in two of the three-leg Asian Grand Prix series last year.

Anu Mariam Jose bagged the bronze in 53.95 sec while Subashini Rasnayake of Sri Lanka won the silver in 53.35 sec.

Sahana Kumari gave India the second gold in women's high jump by clearing 1.86m. Nadiya Dusanova of Uzbekistan was second in 1.86m and Wanida Boonwan of Thailand was third with 1.83m. Sahana, who competed in the London Olympics last year, holds the national record of 1.92m.

It was a 1-2 finish for India in men's high jump with Jithin Thomas clearing 2.18m while Nikhil Chitarasu too came up with 2.18m but was adjudged second as he cleared the height in more attempts than his compatriot. Sun Zhao of China was third in 2.14m.

Nitin Rawat, who took part in the first leg on invitation from the organisers, fetched the fourth gold for India as he clocked 14:35.03 sec to win men's 5000m race. His Indian team-mate Kheta Ram bagged the silver in 14:55.12 sec while Sri Lanka's D L Samarajeewa was third in 15:10.91 sec.

But the highlight of the first leg was the Asian leading jump of 17.10m from Roman Valiyev of Kazakhstan beating arch rival Maheswary of India who missed World Championships 'B' standard by just 2cm with an effort of 16.83m. The third place went to another Indian jumper Arpinder Singh, with 16.74m.

Meanwhile, the Chinese ruled the women's discus throw as they won all the medals on offer, while Poonia finished with a below par 56.31m.

Poonia, who is set to take part in the prestigious Diamond League Meetings opening leg in Doha on May 10, has a personal best of 64.76m, which is also a national record.

Being early in the season, the athletes were finding it difficult to reach their best form and none could cross the 59m distance.

Another Indian Jasdeep Singh finished seventh in the same event with an effort of 17.50m. Olympian Karhana holds the national record in men's shot put with 20.69m.

Wang Li Ke of China won the gold in the event with a heave of 18.91m while another Chinese Guo Yan Xiang cleared 18.64m for second place and Kamulya Grigority of Uzbekistan took third place in 18.62m.