Italian veteran Valentina Vezzali will seek to bring the curtain down on her career at the London Games by claiming a record sixth fencing gold. 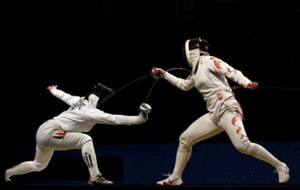 Italian veteran Valentina Vezzali will seek to bring the curtain down on her career at the London Games by claiming a record sixth fencing gold.

If the 38-year-old pulls it off, she will also extend her country's gold medal dominance of the sport which has featured at every modern Olympics since 1896.

Vezzali is as close to a superstar that fencing can boast.

She is married to a footballer -- Domenico Giuliano -- and is the first fencer to have won five Olympic golds in the Foil event.

The mother of one has also collected 13 world championship golds and nine at the European level.

Vezzali is nothing if not determined. In 2005, after taking time out to start a family, she returned to the sport just four months after son Pietro was born and retained her world title.

"Fencing is a mental sport and you must know how to manage when you are ahead but also when you are behind," she said.

Zagunis won gold in Athens in 2004, when she was just 19, only after being called into the tournament as a last-minute replacement and defended her title in Beijing four years later.

The win in Greece was America's first gold in the event for 100 years.

The 27-year-old from Oregon has the Olympics in her blood - her parents were rowers, who met at the 1976 Olympic trials and competed at the Montreal Games.

"I love fencing. I love training. I love competing. I don't want to stop. How many people can say they get up in the morning and love going to work and working out, and have this great feeling of working toward a goal?," she said.

"The Olympic goal is something that comes every four years. But you're always working to beat a certain opponent, to win a certain competition, to improve yourself. There is so much that goes into it."

Other names to look out for in London are China's Lei Sheng, the men's world champion in the Foil.

But he is expected to face stiff competition from Japan's Yuki Ota who won silver in Beijing, his country's first Olympic medal in the discipline.

Italy, France and Hungary have been the dominant powers in Olympic fencing with a return of 45, 41 and 34 golds respectively.

Hosts Great Britain are not expected to upset the balance of power.

In fact, as in taekwondo, the country's fencing authorities have been mired in another selection controversy with Scottish fencer Keith Cook claiming he was passed over for the men's foil in favour of Husayn Rosowsky.