According to Indian sports minister Jitendra Singh, the roadmap towards India's return to the Olympic fold has been chalked out. 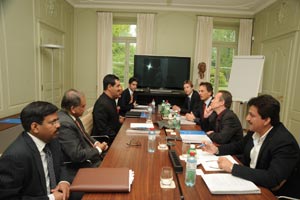 According to Indian sports minister Jitendra Singh, the roadmap towards India's return to the Olympic fold has been chalked out.

Speaking to NDTV after his meeting with International Olympic Committee officials in Lausanne on Wednesday, the Indian sports minister said: "The IOC has agreed to work with the Indian government for the new proposed Sports Bill. This is a major achievement and we will be working towards the sports bill legislation with all stake holders of the international body." (Note: Image courtesy - Ave Kuluki)

The sports ministry had been insisting on the implementation of the Sports Bill that limits the age and tenure of an official representing a national sports federation.

A beaming sports minister said: "The roadmap has been decided to bring India back in the Olympic fold. Our meeting went off well and IOA, IOC and the Indian government are all on the same page." He did not say how soon IOC will make an announcement.

On Wednesday in Lausanne, after members of the IOA presented its case to IOC to lift the ban imposed on it, the IOC met the delegation from the sports ministry, headed by Jitendra Singh and sports secretary P K De, separately, among others.

Jitendra Singh also asked the IOC to assist in bringing India back into the Olympic fold and said that the country is at 'crossroads' as far as sports administration was concerned.

"We are at the crossroads of change in the way sports is administered in India. We come to you with a common understanding. We hope the IOC will also assist us in bringing about the changes and when we do, allow Indian sportspersons to compete under the Indian Flag," Jitendra added during his speech at the International Olympic Committee Headquarters in Lausanne.

Jitendra re-iterated that the Government of India respects the autonomy of the Indian Olympic Association and National Sports Federations.

"The Government of India respects the autonomy of the IOA and the NSFs. There has been no case where the Government has intervened in the day to day functioning of the NSFs," he told the IOC members.

The IOC Executive Committee banned India as the IOA had failed to conduct elections under the Olympic constitution and also allowed a tainted official to contest elections for a top post in December last year.

After IOA flouted IOC orders and went ahead with the elections (Abhay Singh Chautala and scam-tainted Lalit Bhanot became president and secretary, uncontested) Pere Miro, director of IOC relations with National Olympic Committees, had said: "The (IOA) election process has been tarnished since the beginning. Many different interferences, many governmental rules and their own bad interpretation of IOA statutes."

The IOA ban was expected after they decided to go ahead with the elections under the government's Sports Code, defying the IOC's diktat to hold the polls under the Olympic Charter.

The minister also sought to explain the Sports Code.

"It is a set of guidelines that the Government has come out with and expects the IOA and the NSF to voluntarily adopt. A federation does not have to follow the Sports Code by the letter. In many cases, where the situation demands, the Government has relaxed the provisions of the Code." 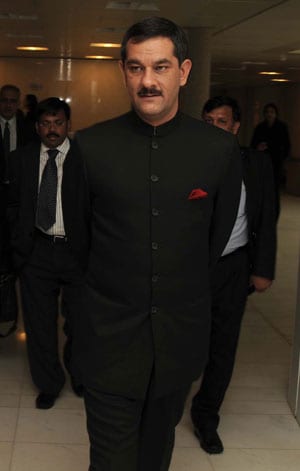 Jitendra also emphasised on the role of judiciary in the functioning of the National Sports Federations.

"Over the years the judiciary has repeatedly expressed its dismay at the state of affairs in many National Sports Federations. Because of the absence of any clear guiding principles of governance among the NSFs, the judiciary has repeatedly taken recourse to the Sports Code and has insisted on the NSF adhering to its principles. Such directions are binding on the concerned NSF," he explained.

"That is what happened in the case of the IOA. It was not the Government but the Judiciary who asked for adherence to the Sports Code. It was the binding order of the court that became applicable. There was nothing wrong with the order of the Court," Jitendra said.

"All it directed was that the elections should be held as per the constitution of the IOA, with the provisions of the Sports Code also being made applicable. There was no conflict in the provisions."

He further told the IOC members that the government only wanted the NSFs to have transparency and accountability.

He also clarified the contents of the proposed Sports Bill.

"There has been a fair amount of un-informed criticism of the attempt of the Government to bring about legislation to govern the working of the NSF. I believe much of the criticism would have vanished, if the aggrieved persons had read the brief to the Drafting Committee.

"We would like three major issues to be addressed in the Sports Bill. The first is a common code of ethics, the second is an independent body to conduct elections and the third is a dispute resolution mechanism. None of these are possible without legislation. We need that piece of legislation to bring about the basic theme that I had set out initially - good governance, transparency and accountability.

"But let me assure you that there will be widespread consultations before any attempt is made to bring a bill before the Indian Parliament. We will consult individual Sports Federations, the IOA and the general public. Every view will be considered and wherever possible, discussed with the concerned body or individual," he explained.

Jitendra reminded that the Government has also invited the IOC to be a part of the Drafting Committee.

"I have already asked the IOC to be a part of the Drafting Committee and I reiterate that invitation. We will also send the draft bill to the IOC and invite their comments before finalising the bill that will go before Parliament," he said.

Comments
Topics mentioned in this article
Olympics 2012 Randhir Singh Other Sports
Get the latest updates on ICC T20 Worldcup 2022 and CWG 2022 check out the Schedule, Live Score and Medals Tally. Like us on Facebook or follow us on Twitter for more sports updates. You can also download the NDTV Cricket app for Android or iOS.