Having returned from the Olympic Games on a high with his prodigy Saina Nehwal bagging a bronze, India's national badminton coach Pullela Gopichand said the country's budding shuttlers have a bright future and are capable of achieving bigger feats. 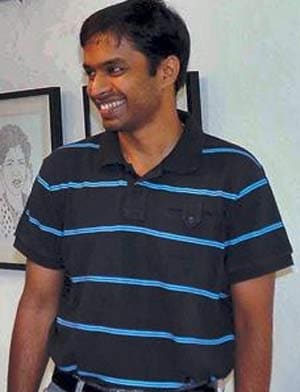 Having returned from the Olympic Games on a high with his prodigy Saina Nehwal bagging a bronze, India's national badminton coach Pullela Gopichand said the country's budding shuttlers have a bright future and are capable of achieving bigger feats.

"We definitely have a great future. Our players are young. I hope we definitely achieve bigger things," he told PTI after returning from London.

Apart from Saina, Parupalli Kashyap also did well as he became the first Indian male to reach the quarterfinals in the Olympics.

Gopichand has played a crucial role in the emergence of both Saina and Kashyap as world class players. He has been coaching Saina for the past several years and has attributed to her success.

"As much as a coach who has coached her (Saina) for nine years, the kind of inputs, whether it is the game or her mental attitude or the physical quality, which she has, I think a lot has gone.

"I am very happy today that she is able to achieve this great feat," Gopichand, who won the All England Open Badminton Championship in 2001, said. Asked how he strategises when it comes to facing the Chinese shuttlers, who are top seeds in badminton, the coach explained: "It is not that they all (Chinese) play the same game. Wang Yihan plays a different as compared to others.

Different players have different styles. It is very important that we plan for each of these players separately."

The 38-year-old coach, who has set up the Gopichand Badminton Academy that is hailed for its coaching and facilities, said he was happy with his academy's role in the players' growth.

"I would say two things. One is the Academy's role in providing what is required and Gopichand, the coach's role. Both are very important for a player.

Comments
Topics mentioned in this article
Badminton Olympics 2012 India
Get the latest updates on ICC T20 Worldcup 2022 and CWG 2022 check out the Schedule, Live Score and Medals Tally. Like us on Facebook or follow us on Twitter for more sports updates. You can also download the NDTV Cricket app for Android or iOS.