It was an all-round decent effort by all the Indian paddlers, men and women, to cruise to the second round at the commonwealth TT here in Delhi. 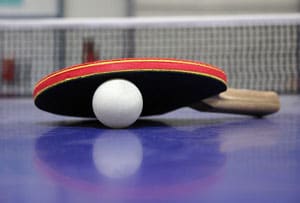 It was a good beginning for the Indian paddlers in the Commonwealth Table Tennis Championships, as both the women's and men's team advanced to the second round of the tournament with minimum fuss here on Sunday.

The women paddlers first brushed aside minnows Southern neighbours 3-0 and then went on to beat Canada with a same margin in their group C matches, while the men's team defeated Australia and South Africa to top group B and move into the next round.

The Indian men's side did not have a great start as Anthony Amalraj (world ranked 150) was shocked by Australia's David Powell, ranked 617, in the opening game. The 27-year-old Indian looked off colour and was comprehensively beaten 7-11 8-11 8-11.

Achanta Sharath Kamal (70) did not disappoint the home fans as he brushed aside the challenge of young Kane Townsend to level the rubber 1-1. The seasoned Indian then went on to win the reverse tie against Powell after current national champion Soumyajit Ghosh won his fixture, to seal the contest in India's favour.

Against South Africa too, Amalraj made heavy weather before eking out a win against Luke Abrahams (661). He looked woefully out of touch, dropping points on forehand shots. This after Sharath had bagged the first tie easily to give India the lead.

"I am happy with the way I played today. It was an easy draw for us and I am happy we did well. The competition will get tougher from here," said Ghosh after the match.

In the women's team event, Mouma Das (234) looked a little rusty at the start as she dropped the first game 13-15 to unseeded Sri Lanka's Ishara Madurangi. The experienced Indian paddler, however, took the next three games to give India a 1-0 lead

K Shamini (275), in the second encounter, took her opponent lightly after winning the first game against Sri Lanka's Nuwani Vithanage. The reigning national champion was made to work hard before eventually winning 11-7 14-12 11-8.

In the match against Canada, K Shamini and Mouma Das defeated Yuen Sara and Shirley Fu in their respective matches to take India to the top of the group. The hosts got a walkover in the final fixture as Canada's Mo Zhang, ranked 170, did not turn up for the championships.

This time around the hosts' first bet was Shamini who clinically breezed past Sara 11-5 11-5 11-7. Mouma lost a game in her contest against Fu after winning the first one.

However, she won the next two games to give India a 2-0 lead and the contest.

"I lost one game in both my matches. That happens in a tournament. Moreover, I haven't played in a match after the World Championships," Mouma said.

Comments
Topics mentioned in this article
Olympics 2012 Cricket Soumyajit Ghosh Table Tennis Other Sports
Get the latest updates on ICC T20 Worldcup 2022 and CWG 2022 check out the Schedule, Live Score and Medals Tally. Like us on Facebook or follow us on Twitter for more sports updates. You can also download the NDTV Cricket app for Android or iOS.