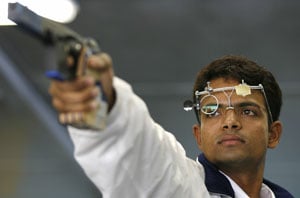 Indian shooter Vijay Kumar has qualified for the final event of the 25m Rapid Fire pistol event and in the process he even became the second shooter in the event to break the previous Olympic record of 585.

Vijay Kumar, who had scored 293 in the stage 1 of the qualification, scored 98, 97, 97 in the second stage to take his total score to 585. Vijay finished fourth among the top six shooters who qualified for the final event.

However, it was Russia's shooter Alexei Klimov who created a new World Record in Men's 25m Rapid Fire Pistol Shooting qualifications. He scored a total of 592 after Stage 2 breaking the World Record of 591 and Olympic Record of 583, with 294 points in Stage 1 and a whopping 298 in Stage 2.

Klimov will be the gold medal favourite in the finals as he finished atop, followed by China's Feng Ding and Cuba's Pupo Leuris.

Comments
Topics mentioned in this article
Olympics 2012 India
Get the latest updates on India vs South Africa and check out  Schedule, Results and Live Score. Like us on Facebook or follow us on Twitter for more sports updates. You can also download the NDTV Cricket app for Android or iOS.