Indian paddlers not among favourites in Olympics: Leszek Kucharski

India's foreign table tennis coach Leszek Kucharski feels Olympic-bound paddlers Soumyajit Ghosh and Ankita Das can spring a few surprises but they are not among the favourites to win a medal in the London Games. 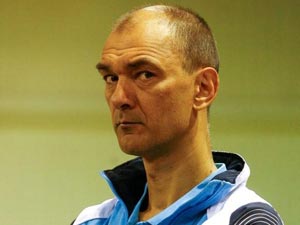 India's foreign table tennis coach Leszek Kucharski feels Olympic-bound paddlers Soumyajit Ghosh and Ankita Das can spring a few surprises but they are not among the favourites to win a medal in the London Games.

"Ankita and Soumyajit are improving a lot but they don't belong to favourites anyway. My advice to both the paddlers would be to use the experience as much as possible. Watch the best, observe them carefully and compete with the best,"

Both Ghosh and Ankita surprised one and all by qualifying for Olympics but they know it would not be easy when it comes to facing European and Chinese giants in their debut appearance at the mega-event.

In the words of Kucharski, both have the ability to create a few upsets but it would not be fair to expect something big from the two at the intimidating stage.

"I think 2016 or 2020 Olympics would be much better for them. These big events like Olympics are always perfect to gain experience and motivation even if you don't play many matches," he said.

Former World table tennis champion, Peter Karlsson had recently said that Soumyajit and Ankita deserved their place in the London Games but it would not be right to expect something big from the two Indians at the marquee event.

Kucharski, however, believes that the two have enough firepower to pull off a few upsets in Olympics.

"Yes, they are very strong mentally and that's why they qualified for Olympics," he said.

The Polish coach was also of the view that India's highest-ranked player at 83, Sharath Kamal was both physically and mentally drained during the qualifiers.

"I think he did not stand both the qualifiers physically and mentally. The amount of pressure (to qualify) was quite high on him," Kucharski said.

Sharath lost to countryman Amalraj in Hong Kong to bow out of the competition while in Doha, he finished first in his group but lost in the opening match of the knock-out stage.

Kucharski felt that it would have been great had Sharath, Amalraj and Ghatak qualified for the Olympics.

"Yes, of course. It would be always better to have these three," he said.

The coach said the main issue with Indians is their fitness level.

"The main problem is lack of continuous training during a year which results in bad fitness among others," he said.

Comments
Topics mentioned in this article
Table Tennis Olympics 2012 India Soumyajit Ghosh
Get the latest updates on ICC Women's Cricket World Cup 2022 and IPL 2022, check out the Schedule , Live Score and IPL Points Table. Like us on Facebook or follow us on Twitter for more sports updates. You can also download the NDTV Cricket app for Android or iOS.