A three-member Election Panel will decide on new date for the polls, which were supposed to take place on November 25. 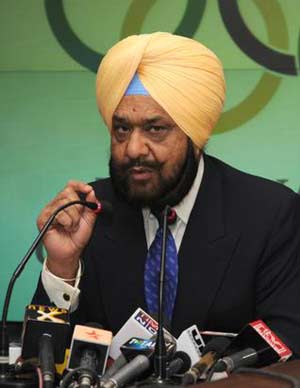 A day after the Abhay Singh Chautala-faction wrote to the International Olympic Committee (IOC) chief accusing IOC member Randhir Singh of flouting the Olympic Charter, the elections for the Indian Olympic Association have been postponed.

A three-member Election Panel will decide on new date for polls, which were supposed to take place on November 25.

Singh's appointment was made following the resignation of S.Y. Quraishi Saturday. The other members of the commission are Justice (retd.) V.K. Bali, who is also the returning officer, and Justice (retd.) J.D. Kapur.

Tarlochan Singh and Ajay Chautala, brother of Abhay who is opposing Randhir in the IOA presidential race, have in their letters to Rogge said: "The IOC member in India Mr Randhir Singh is violating your instructions and IOC Charter approaching Secretary, Ministry of Youth Affairs & Sports, Government of India on 14th November 2012 to seek clarification on his own candidature as per the National Sports Code.
They want the IOC chief to now consider Randhir Singh's act as a violation of the IOC instructions as well as the Olympic Charter.

Meanwhile, the IOA has received another letter from the IOC asking the IOA to conduct the election exclusively under its constitution currently in force and the rules of the Olympic Charter.

In his reply, Malhotra said: "While IOC is insisting that its charter and IOA constitution are paramount, the Government of India has formulated a Sports Code and it wants that IOA and National Sports Federations (NSF) should follow that code."

Abhay Chautala and Randhir Singh are contesting for the president's post while Lalit Bhanot has filed nomination papers for the job of secretary general.

Comments
Topics mentioned in this article
Olympics 2012 Randhir Singh Other Sports
Get the latest updates on IPL 2020, check out the IPL Schedule for 2020 and Indian Premier League (IPL) Cricket live score . Like us on Facebook or follow us on Twitter for more sports updates. You can also download the NDTV Cricket app for Android or iOS.