The 83-member strong Indian contingent was said to be the biggest but more importantly the strongest ever. However, India managed to win just 6 medals. Here's a look at the names who didn't live up to their billing in our top 5 flops at the London Games. 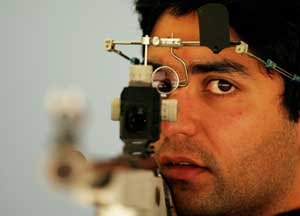 The 83-member strong Indian contingent was said to be the biggest but more importantly the strongest ever. However, India managed to win just 6 medals. Here's a look at the names who didn't live up to their billing in our top 5 flops at the London Games.

1. ARCHERY: Number 1 disappointment came from the archers who 'bowed' out of the Olympics without a fight. In fact the only world number 1 in the Indian contingent Deepika Kumari fumbled both in the team and the individual event. What's worse, was the excuse offered by the India coach Limbaram blaming black magic from rival teams for their early exit.

2. INDIAN MEN'S HOCKEY TEAM: At number 2 is Hockey or should we say SHOCKEY. No one expected a medal from the Indian men's team but finishing 12th out of a total of 12 teams, without winning a single game, marked the worst performance by an Indian hockey team at the Olympics.

3. TENNIS: Mahesh Bhupathi and Rohan Bopanna took on the All India Tennis Association when they said either we play together or not at all. But they lost in the 2nd round at the Games. Leander Paes, who was left to play with an inexperienced Vishnu Vardhan, also fizzled out in the 2nd round.

Paes and Sania Mirza promised India's best chance in the mixed doubles but they too crashed out in the 2nd round. India's tennis campaign at the Olympics was no less than a double fault.

4. RONJAN SODHI AND ABHINAV BINDRA: At number 4 are the 2 shooters who misfired. Abhinav Bindra was India's first ever individual gold medallist at the Olympics but he failed to even qualify for the final of 10 meter Air Rifle event. Ronjan Sodhi, on the other hand, was the world champion in double trap. But he too, like Bindra, made an early exit.

5. MALE BOXERS:Seven male boxers from India qualified for the London Games but none won a medal. Devendro Singh and Vijender Singh came close, reaching the quarters, but faltered at the last hurdle. Controversies over the points system aside, it wouldn't be wrong to say that the Indian boxers fell well short of country's expectations.

Comments
Topics mentioned in this article
Olympics 2012 India
Get the latest updates on IPL Auction 2023 and check out  IPL 2023 and Live Cricket Score. Like us on Facebook or follow us on Twitter for more sports updates. You can also download the NDTV Cricket app for Android or iOS.