India at London 2012: Kashyap creates history, but Deepika crashes out

It was a mixed day for India at the Olympic Games on Wednesday as shuttler Parupalli Kashyap became the first Indian man to reach the quarterfinals in badminton while archery medal hope Deepika Kumari tumbled out after losing in the opening round of the individual event. 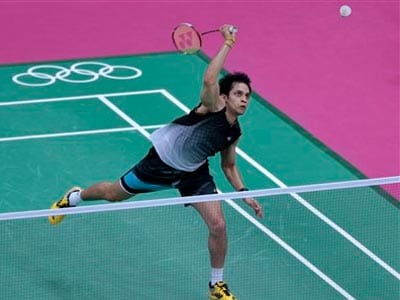 It was a mixed day for India at the Olympic Games on Wednesday as shuttler Parupalli Kashyap became the first Indian man to reach the quarterfinals in badminton while archery medal hope Deepika Kumari tumbled out after losing in the opening round of the individual event.

Kashyap secured a hard-fought 2-1 victory over Sri Lanka's Niluka Karunaratne at the Wembley Arena to emulate the feat of fellow Hyderabadi Saina Nehwal, who became the first to reach the last eight in women's competition at the last Games in Beijing.

Badminton was introduced as a Games medal discipline in 1992 at Barcelona, Spain.

Also bringing cheer to the Indian camp was Manoj Kumar who cruised into the pre-quarter finals of the 64 kg men's boxing event with a convincing first-round victory over Serdar Hudayberdiyev of Turkmenistan at the ExCel arena on Tuesday.

Manoj notched up a 13-7 win in the light welterweight category to take the total number of Indian boxers in the pre-quarterfinals to five after the completion of the first-round bouts here.

Manoj started cautiously but gradually opened up to prevail over his opponent.

Kashyap, ranked 21st in the world, had to draw from all his experience to quell the strong challenge of his rival, ranked 27 places below him in the world chart, 21-14 15-21 21-9 in the pre-quarterfinal clash that lasted 66 minutes.

The 25-year-old Hyderabadi thus emulated the feat of Saina.

Deepika, on the other hand, flattered to deceive. Touted as a strong medal contender because of her world no.1 ranking, she could not live up to the billing and lost 2-6 against host country's Amy Oliver ending her as well as India's archery campaign at the Lord's Cricket Ground.

The 18-year-old Ranchi girl was completely off colour today and was no match for her British rival, who easily pocketed the encounter.

In individual events, which is decided on best of five sets (three arrows each), one who wins a set irrespective of the margin gets two points.

Even as both the archers ended up scoring a total of 104 each at the end, Oliver managed to win three sets.

Deepika could bag just one set, and that too mainly because of the rare error made by her opponent, who ended up shooting a four in one of her three chances in the second set.

A double gold medal winner at the Commonwealth Games held in Delhi two years ago, Deepika failed to hit even a single perfect 10 in four sets.

On the other hand, Oliver scored two perfect 10s, besides hitting the bull's eye once.

Earlier, Kashyap survived a scare from the 5 feet 8 inch tall Sri Lankan in a match that witnessed several long rallies.

The Indian was made to work hard for every point as the Sri Lankan showed excellent retrieving power and engaged his opponent in long rallies.

Kashyap will meet the winner of the match between Indonesia's Simon Santoso and world number two Lee Chong Wei of China in the last-eight stage.

The previous best performances by Indian male shuttlers at the Olympics were by Dipankar Bhattacharjee, who entered the pre-quarterfinals at the 1992 Barcelona Games, and Pullela Gopichand, who lost in the pre-quarters at the Sydney Olympics in 2000.

"KASHYAP on his day is a World Champ! Congrats KASHYAP! Congrats Coach GOPI! We are proud of both of your wards Saina & KASHYAP!" he twitted.

Comments
Topics mentioned in this article
Olympics 2012 India
Get the latest updates on ICC T20 Worldcup 2022 and CWG 2022 check out the Schedule, Live Score and Medals Tally. Like us on Facebook or follow us on Twitter for more sports updates. You can also download the NDTV Cricket app for Android or iOS.