A Dutch judoka has claimed she tackled a man who threw a bottle in the direction of Usain Bolt and his competitors at the start of the Olympic men's 100 metres final. 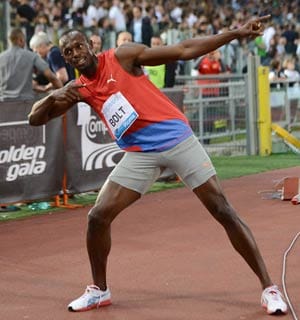 A Dutch judoka has claimed she tackled a man who threw a bottle in the direction of Usain Bolt and his competitors at the start of the Olympic men's 100 metres final.

Edith Bosch said a man in front of her became agitated and then threw the plastic bottle towards the sprinters as the starter called "set" in a packed Olympic Stadium in London on Sunday.

The bottle landed behind the blocks in lane five, a few metres behind Bolt's fellow Jamaican Yohan Blake, and came to a halt just as the sprinters set off.

The green plastic bottle could clearly be seen on TV pictures bouncing onto the track behind the sprinters.

Bosch, who had competed in the judo competition earlier in the Olympics, said she was furious after seeing the man throw the bottle.

"The whole time this guy was shouting 'No Usain Bolt, no' and he was very disrespectful," the 32-year-old told Dutch public broadcaster NOS.

"He stood right in front of me and threw the bottle and I could not stop him. I thought 'what is this?'

"I got furious and gave him a hard slap on the back," said Bosch.

Security guards then took the man away and he was arrested by police.

Bosch, who came up just short of a bronze medal in the women's -70kg competition, said she was especially annoyed because as a result of the incident she missed seeing the race in which Bolt retained his 100m title.

"I hope he gets severe punishment," she added.

British police said a man -- a vending machine technician from Leeds in northern England -- remained in custody on Monday.

Local organisers LOCOG said they were investigating what happened.

But the chief organiser of the London Games, Sebastian Coe, said it had been "poetic justice" that the bottle thrower happened to be sitting next to a judo player.

"The guy was removed and anybody that does that in future will be removed. There is zero tolerance to anything like that."