India did not deserve to be part of Olympic field hockey, former players said on Wednesday, after the eight-time gold medallists were condemned to their poorest finish ever. 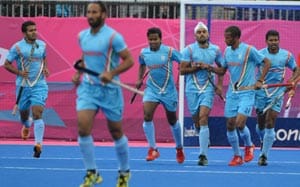 India did not deserve to be part of Olympic field hockey, former players said on Wednesday, after the eight-time gold medallists were condemned to their poorest finish ever.

India, who lost all their five group matches, will play South Africa for the last two places in the 12-nation competition in London - lower than their previous worst of eighth position at the 1996 Atlanta Games.

"This team did not deserve to be in the Olympics," said former international Mohammad Shahid. "They have let the whole nation down."

India, who won their last Olympic hockey gold in 1980, failed to qualify for the Beijing Games four years ago and needed to win a qualifying event at home in New Delhi to make the trip to London.

Ranked 10th in the world, India were never serious contenders for the semi-finals, but even skipper and goalkeeper Bharat Chetri was stunned at the total meltdown in the ongoing Games.

"We didn't play as a team in the whole tournament," Chetri told the Hindustan Times in London. "Every match we went down and down. The morale is totally down."

Chetri, asked what went wrong with the team, said: "We are not defending, neither are we scoring. We have to learn more hockey. We have to improve a lot."

Former Olympian Gurbux Singh said India needed to start from the beginning and look ahead at doing well at the 2020 Games.

"We should now concentrate on youngsters and prepare for 2020. It will take us at least eight years to overhaul the system," he said.

India's Australian coach Michael Nobbs, who took over last year, escaped criticism which was mainly directed at the players.

"The players have been given a lot of exposure, they can't blame anyone for their performance," said the 1975 World Cup winning captain Ajitpal Singh.

"The team looked awful in all areas. This team has a bunch of mediocre players who are just satisfied to be in the Olympics."

The Hindu newspaper said the performance of the hockey team stood out as "appallingly pathetic".

"What can you expect from a squad that was deficient in defence, disoriented in attack and disgustingly inconsistent in the half-line," the paper said.

"To blame anyone other than the players would be unfair. Everything was provided for them: adequate training, exposure to competitions in all climes and promise of generous rewards."

India were the only team in the competition which failed to gain a point, scoring just six goals against the 18 conceded.

Comments
Topics mentioned in this article
Olympics 2012 India Hockey
Get the latest updates on ICC T20 Worldcup 2022 and CWG 2022 check out the Schedule, Live Score and Medals Tally. Like us on Facebook or follow us on Twitter for more sports updates. You can also download the NDTV Cricket app for Android or iOS.