China's 2004 Athens Games champion Teng Haibin has pulled out of the London Olympics gymnastics competition with an arm injury. 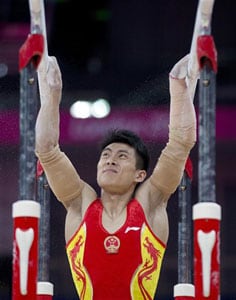 China's 2004 Athens Games champion Teng Haibin has pulled out of the London Olympics gymnastics competition with an arm injury.

Teng, the 2004 gold medallist who missed out on the Beijing Games, picked up the injury during the team's training in Northern Ireland. His place will be taken by Guo Weiyang.

Teng burst into tears after realising his Olympic dream was over, Xinhua reported.

"It's a challenge for us in the London Games with a series of injuries hampering our effort to win the team title, but I haven't lost confidence in the Chinese team," he said.

China's men won seven of eight golds in the men's artistic gymnastics events in Beijing but have played down their chances of a repeat in London.

Comments
Topics mentioned in this article
Gymnastics Olympics 2012
Get the latest updates on India vs Australia Series, check out the India vs Australia Schedule for 2020-21 and Ind vs Aus live score . Like us on Facebook or follow us on Twitter for more sports updates. You can also download the NDTV Cricket app for Android or iOS.