Greece and the Olympics: Wishing for a ray of hope

Eight years after hosting the Olympic Games in the country where they were born, Greeks seem more interested in finding out if there will be light at the end of their dismal economic tunnel than showing concern about what is happening at the London Olympics. 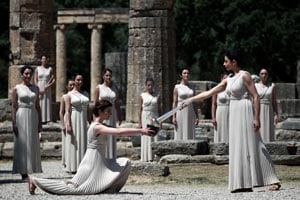 Eight years after hosting the Olympic Games in the country where they were born, Greeks seem more interested in finding out if there will be light at the end of their dismal economic tunnel than showing concern about what is happening at the London Olympics.

"There's no interest like in the past, that's for sure," wrote Kathimerini columnist Giannis Koukoulas. "Perhaps because we don't expect much medal-wise. Probably because there are so many everyday problems which concern Greek citizens, so they don't think about athletes winning medals."

Greece has so far won two bronze medals, one in men's judo with Ilias Iliadis and one in rowing with Christina Giazitzidou and Alexandra Tsiavou in the women's lightweight double skulls -- which puts it at the far end of the medals table, before Moldova, Saudi Arabia, Argentina, Hong Kong and neighbouring Turkey.

A journey through the steamy streets of Athens will not find anyone talking about stellar performances at the Olympics, but about the sizzling summer heat and how people try to make ends meet with the strict austerity measures that have been placed upon them.

Not helping any pro-Olympic atmosphere were two incidents that came after those in Athens in 2004 and Beijing in 2008 when Greek athletes were thrown out of the competition.

Just before the opening ceremony in London, triple jump star Voula Papachristou, 23, was dismissed from the Greek team after posting a racist remark on her Twitter account about Africans and world high jump champion Dimitris Chondrokoukis, 24, was also left out after failing an anti-doping test.

The Athens 2004 Olympics had had a bad start when Greece's top world-class sprinters Kostas Kenteris and Katerina Thanou missed a doping test and were dismissed from the Games disappointing fellow Greeks.

And in the Beijing 2008 Games hurdles champion Fani Chalkia, who had won a gold medal in the Athens Olympics, failed an anti-doping test and was banned for two years by world's athletics body IAAF.

Greece's weightlifting "dream team" which starred in the Athens Games was dismantled, torn apart by a doping scandal which saw many of its stars punished. Only one Greek weightlifter is competing in London.

Thus, a small squad of 103 athletes made up the Greek representation to London with little prospects of winning medals as the financial crunch led to poor training facilities and less coaches.

Dismissed triple jump star Papachristou snapped back after being criticised for her racist comment on twitter. "We have zero support from the state," she told Athens News, describing athletes' training conditions as "unacceptable".

"There is no heating and no hot water to even take a shower in the winter, no air conditioning in the summer and training facilities are squalid and the equipment is in a state of disrepair," she said.

With such a background, "Greeks don't really feel like watching the Games," said Mattheos Theodoridis, 25, who works at a tourism agency.

Nevertheless, some Greeks still believe in the Olympic Games.

"For me the Olympic Games are the best thing that exists. I am happy that they exist and I hope they return to Greece," said Periklis Anastasis, 42, an unemployed construction worker who lives in the Athens Olympic Village left behind after the 2004 Games and given to those in need.

The idea of the Olympics returning permanently to Greece was kicked around once again in Kathimerini as the newspaper wrote last week in an editorial that due to the issue of the Games being a costly extravaganza, "at some point officials will have to discuss the possibility of finding a permanent home for this high-profile event".

"Should that happen, they will have to put on the table a proposal by late statesman Constantine Karamanlis who suggested holding the Games every four years near their ancient birthplace in Olympia," the newspaper wrote.

"Stop Victimizing the World's Taxpayers, Move the Olympic Games to Greece," Nicos E. Devletoglou, emeritus professor of economics at the University of Athens, wrote this week in Forbes Magazine.

Comments
Topics mentioned in this article
Greece Olympics 2012
Get the latest updates on ICC T20 Worldcup 2022 and CWG 2022 check out the Schedule, Live Score and Medals Tally. Like us on Facebook or follow us on Twitter for more sports updates. You can also download the NDTV Cricket app for Android or iOS.