There is a dearth of quality hockey players in India and the present national team possesses a "bunch of mediocre" individuals who are just satisfied to be Olympians, feel yesteryear stars of the game. 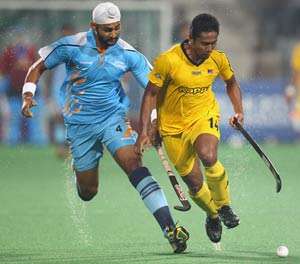 There is a dearth of quality hockey players in India and the present national team possesses a "bunch of mediocre" individuals who are just satisfied to be Olympians, feel yesteryear stars of the game.

The former players were scathing in their attack following India's disastrous Olympic campaign. After losing four consecutive matches in Group B, the eight-time champions are staring at the worst-ever finish in the quadrennial extravaganza.

Former India captain Ajit Pal Singh said the Bharat Chetri-led side has been exposed in London and it has no excuses to offer for the dismal showing.

"The present players have got a lot of exposure, so they can't blame anyone for their performance. They looked lethargic, the defence as usual was shaky, the team looked awful in all areas," the 1975 World Cup winning captain told PTI.

"The present team has a bunch of mediocre players who are just satisfied to be in the Olympics," said Ajit Pal, who was initially named as India's Chef de Mission for the London Olympics but gave the mega-event a miss due to spondylitis.

Another former skipper Zafar Iqbal, who was a part of India's eighth and last Olympic gold medal-winning side in 1980 Moscow, agreed with Ajit Pal and said ace drag-flicker Sandeep Singh has been a big let down in London.

"Sandeep may be a good penalty corner specialist but he is nowhere on the ground. He is found wanting in the defence. A quality player is one who has the ability to perform under pressure," he added.

Zafar agreed with chief coach Michael Nobbs, who had questioned the commitment of Indian players after the prolonged losing streak in the London Games.

Comments
Topics mentioned in this article
Hockey Olympics 2012 India
Get the latest updates on ICC T20 Worldcup 2022 and CWG 2022 check out the Schedule, Live Score and Medals Tally. Like us on Facebook or follow us on Twitter for more sports updates. You can also download the NDTV Cricket app for Android or iOS.