Jon Uriarte says it's destiny and a gift that his Australian team will face his son Nicolas and native Argentina in their opening volleyball pool match at the London Olympics. 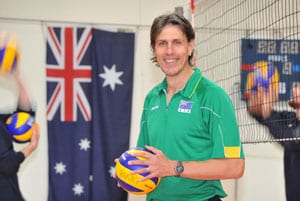 Jon Uriarte says it's destiny and a gift that his Australian team will face his son Nicolas and native Argentina in their opening volleyball pool match at the London Olympics.

Uriarte, 50, is in his second coaching stint in Australia and his reward for qualifying the 'Volleyroos' for London is a showdown to conflict the loyalties of his family back in Buenos Aires.

Uriarte, who won a bronze medal with Argentina at the 1988 Seoul Olympics, has coached his home country in between stints with Australia in 2001-2004 and since May last year.

Australia qualified for a second Olympics after finishing ahead of higher-ranked Iran, Japan, China and South Korea at a qualifying tournament in Tokyo in June.

He roars with laughter at the thought his emerging Australian team will have his country of birth, organised by setter Nicolas, lining up on the other side of the net in their opening game at Earl's Court on July 29.

"It's some kind of gift. I can't believe it that I would be at the Olympics with my son for our own achievements," Uriarte told AFP.

"Nicolas is now 22, he's earned his position in the Argentina national team and I've been so happy that life has given me this opportunity for my work to be so fulfilled.

"My son is having a similar opportunity and he is earning his position in the national team and then we are going to be together in the same party at the Olympics, that is something amazing.

"To be there with all of my family and enjoying being there and expressing ourselves is some kind of gift for our life."

Jon is in regular contact with his family and Nicolas through Internet video calls and says his family was overjoyed when news reached them that Australia had made it through to the Olympics.

"That night it was 12 hours' time difference from Japan to Argentina and when I woke up the next day I connected with them through Skype and my family was having sushi just to celebrate that we had qualified for the Olympics in Japan," he chuckled.

"All my three children play volleyball. It was their choice. They are very passionate about their sport, everybody was just so happy. The technology allowed me to watch them having that dinner on my screen."

But now come the split loyalties among the Uriarte clan as the big day draws near.

Jon's daughter, Delfina, 15, who has played state-level volleyball in Buenos Aires and lived for four years in Australia during her father's first stint there, knows who she will be supporting in London.

"My wife asked Delfina 'who are you going to cheer for?' and she said 'I will paint my two cheeks both countries' flags, but I want Australia to win'", Jon said.

"My family all enjoyed their time here and loved this country deeply. Argentina is our country of birth and we have the culture, but we learned to love this country so much."

Under Uriarte, Australian volleyball has grown under a junior scholarship scheme, first developed by him at Australia's Institute of Sport in Canberra early last decade.

Now Australia, with all the squad playing in overseas professional leagues, has climbed to 22 in the FIVB world rankings, won the Asian championships in 2007 and finished fourth last year.

Uriarte believes his intimate knowledge of the Argentine team will give Australia its best chance of springing an upset in London.

"From the training point of view, I know the Argentina team quite well and I will have a good plan against them (at the Olympics)," Uriarte said.

"We know Argentina have been playing in the World League for the past four years. They are playing the best teams in the world all the time.

"We have been fortunate to get the opportunities against the best teams and on our way to Japan we were able to play Poland, Bulgaria and Italy, who are three of the five teams we have got in our pool.

"I think we will be really well prepared for this opening match against Argentina and Nicolas."

Comments
Topics mentioned in this article
Volleyball Argentina Australia Cricket Team Olympics 2012
Get the latest updates on India vs South Africa and check out  Schedule, Results and Live Score. Like us on Facebook or follow us on Twitter for more sports updates. You can also download the NDTV Cricket app for Android or iOS.