Formula One boss Bernie Ecclestone isn't so sure about staging races around London's Olympic Stadium after the games. 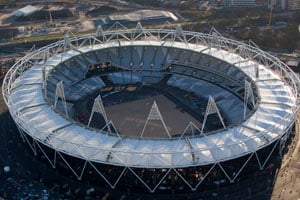 Formula One boss Bernie Ecclestone isn't so sure about staging races around London's Olympic Stadium after the games.

A group working in conjunction with F1 was revealed last month to be one of four bidders being considered as future tenants for the east London venue.

But plans for a London street race, with cars going past iconic sights in the center of the capital, had already been unveiled in June, and endorsed by British drivers Jenson Button and Lewis Hamilton.

"I'd rather (have a race) where we originally planned in central London," Ecclestone said at the Olympic Park on Saturday.

The proposed route would have a start-finish line on the Mall outside Buckingham Palace, with Trafalgar Square, the Houses of Parliament and London Eye also featuring.

"We will work on that," Ecclestone said. "It's a project we are going to try to make happen."

But Ecclestone isn't completely ruling out a race instead going in and out of the 486 million-pound ($760 million) Olympic Stadium to join the existing British Grand Prix at Silverstone on the F1 calendar.

Little detail is known, though, about the plans by Intelligent Transport Services, which is leading the F1 Olympic Park bid and has held talks with Ecclestone.

The other bids being considered for the stadium are from Premier League football club West Ham, fellow east London club Leyton Orient and a football business college. The bids are being evaluated by the company in charge of securing a legacy for Olympic venues.

Ecclestone took a tour of the Olympic Park halfway through the games on Saturday, a month after hosting IOC President Jacques Rogge at Silverstone.

"They've done a good job. I think it's really, really superb," Ecclestone said of the London Games. "I'm very proud of England, probably for the first time in what they've done. They've done a first-class job."