Ethiopia's Tiki Gelana won gold in the women's marathon on the streets of London on Sunday, denying the powerful Kenyans  their first Olympic crown in a Games record time of 2hr 23min 7sec. 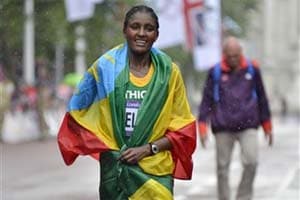 Ethiopia's Tiki Gelana won gold in the women's marathon on the streets of London on Sunday, denying the powerful KenyansÂ  their first Olympic crown in a Games record time of 2hr 23min 7sec.

Gelana, who ran the second fastest time of 2012 in this year's Rotterdam marathon, took charge of the race in the closing stages and 2011 world silver medallist Jeptoo did not have the strength to match her.

Mary Keitany, who has won the past two London marathons, was long part of the leading pack but slipped off the pace shortly before the 41-kilometre mark as the rain returned to drench the flag-waving crowds lining the course.

The big names were content to bide their time in the early stages of the race, which started in persistent rain on The Mall, the road linking Buckingham Palace with Trafalgar Square.

By the 25km mark, a group of six runners had edged ahead with the three Kenyans and three Ethiopians -- Mare Dibaba, Tiki Gelana and Aselefech Mergia -- four seconds clear of the field.

Mergia soon dropped out of the reckoning and as the sun appeared, the race looked set up for a straight shoot-out between the Kenyans and Ethiopians.

But Russia's Petrova Arkhipova closed the gap on the leading pack and was in the lead at the 35km mark in front of Keitany, Jeptoo and Gelana, with reigning world champion Kiplagat dropping off the pace.