Chelsea earned a 3-1 win to move third in the table with Jose Mourinho's changes proving effective. 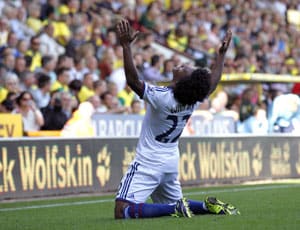 Eden Hazard and Willian came off the bench and scored as Chelsea won 3-1 at Norwich City on Sunday to climb to third place in the Premier League.

The visitors took a fourth-minute lead when Oscar drilled home from Demba Ba's lay-off, but Norwich gradually took the upper hand on a sun-soaked afternoon at Carrow Road.

Chelsea goalkeeper Petr Cech had to prevent David Luiz from putting through his own goal and Ricky van Wolfswinkel chested the ball wide from close range, before Norwich equalised in the 68th minute.

Martin Olsson's deep left-wing cross was headed back across goal by Van Wolfswinkel and Anthony Pilkington ghosted in behind Luiz to glance a deft header past Cech.

Chelsea manager Jose Mourinho reacted by sending on Hazard and Willian, and it proved a masterstroke.

Hazard completed an 85th-minute counter-attack with a low shot that squirmed beneath John Ruddy to put Chelsea ahead before Willian curled home a glorious left-foot shot a minute later to claim his first goal for the club.

"When I make a change, the change is always fantastic and the players make it fantastic or make it rubbish -- it's up to them," said Mourinho. 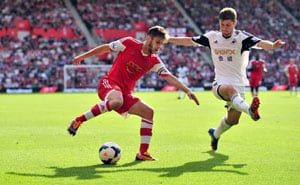 "I'm happy for Willian because he is starting with us, he is not 100 percent. He was injured in the week and the kid made himself available to try to help, and when he came on he gave us a push."

The two late goals elevated Chelsea to third place, two points beneath leaders Liverpool, while Norwich slipped to 17th, one place above the relegation zone.

Southampton continued their fine start to the season by winning 2-0 at home to Swansea City, which sent Mauricio Pochettino's side to the dizzying heights of fourth place.

Saints captain Adam Lallana broke the deadlock in the 19th minute when he polished off a fine pass from Steven Davis.

Goalkeeper Artur Boruc thwarted Swansea on several occasions as the visitors pushed for an equaliser, before Jay Rodriguez made the game safe with seven minutes remaining.

Comments
Topics mentioned in this article
Football Bayern Munchen Chelsea Manchester City Brazil English Premier League Alex Ferguson Olympics 2012 John Terry Willian Demba Ba Mark Hughes
Get the latest updates on India vs South Africa and check out  Schedule, Results and Live Score. Like us on Facebook or follow us on Twitter for more sports updates. You can also download the NDTV Cricket app for Android or iOS.