Eight women badminton players at the Olympics were charged by the sport's governing body on Wednesday with 'throwing' matches to secure an easier draw in the next round. 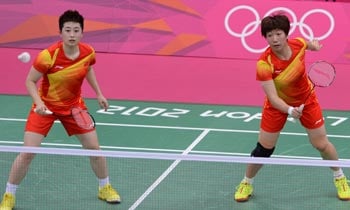 Eight women badminton players at the Olympics were charged by the sport's governing body on Wednesday with 'throwing' matches to secure an easier draw in the next round.

Four pairs in the women's doubles competition - one from China, one from Indonesia and two from South Korea - could be disciplined after the Badminton World Federation (BWF) took action.

There were also calls for the players to be disqualified and for opponents who finished in third place in the round-robin groups to be awarded quarter-final places instead.

The eight players have been charged with "not using one's best efforts to win a match" and "conducting oneself in a manner that is clearly abusive or detrimental to the sport".

A disciplinary hearing will be held later on Wednesday.

At present all four pairs are included in the order of play with their quarter-finals scheduled for Wednesday evening, starting from 1600GMT at the Wembley Arena.

Angry spectators jeered and booed the players on Tuesday after they appeared to deliberately serve into the net, or hit the shuttlecock long or wide.

They were allegedly attempting to manipulate the final standings in the first-round group stage, with two pairs who had already qualified apparently wanting to lose to secure a favourable draw in the next round.

The Group A match between the powerful Chinese pairing of Yu Yang and Wang Xiaoli and unseeded South Korean pair Jung Kyung and Kim Ha Na came under scrutiny by the BWF after the Chinese lost heavily.

The longest rally in the match was just four shots.

Yu said after the match: "We've already qualified, so why would we waste energy? It's not necessary to go out hard again when the knockout rounds are tomorrow."

After the match, South Korean head coach Sung Han-Kook reportedly said: "It's not the Olympic spirit to play like this. How could the number one pair in the world play like this?"

Another South Korean coach, Kim Moon-Soo, told the Xinhua news agency: "I think the Chinese players violated the Olympic spirit when they deliberately missed their serves."

China's Olympic delegation has launched an investigation into the allegations, state media said.

"The Chinese Olympic Committee... opposes any kind of behaviour to violate the sporting spirit and morality," Xinhua news agency quoted a Chinese Olympic spokesman as saying.

Tournament referee Torsten Berg came on to court during that match to warn the players about their conduct and was thought to have shown a black card -- meaning a dismissal -- but it was apparently rescinded.

Berg said after the match: "We have looked seriously into the case and as referee I have taken a decision and made a report to the BWF which will be known in due course."

Meanwhile, Gail Emms, a badminton Olympic silver medallist for Great Britain in 2004, who was at the event for the BBC, said the players involved should be kicked out of the Olympics.

"I'm furious. It is very embarrassing for our sport," Emms said.

"This is the Olympic Games. If badminton wants to save face they should disqualify the two pairs and reinstate the pairs that came third in the group.

"This is something that is not acceptable. The crowd paid good money to watch two matches."

Tuesday's incident was not the first such controversy to involve Chinese players.

At the 2003 world championships in Birmingham, Yang Wei and Zhang Jiewen were reprimanded after being found guilty of deliberately losing a quarter-final match.

Yang and Zhang were sanctioned after they were adjudged not to have been trying in a last-eight tie against compatriots and eventual champions Gao Ling and Huang Sui.

Yang and Zhang were charged with bringing the game into disrepute for not trying against Gao and Huang, the world number one pairing.

Comments
Topics mentioned in this article
Badminton Olympics 2012
Get the latest updates on ICC T20 Worldcup 2022 and CWG 2022 check out the Schedule, Live Score and Medals Tally. Like us on Facebook or follow us on Twitter for more sports updates. You can also download the NDTV Cricket app for Android or iOS.