Andrea Baldini, the former world top-ranked men's foil fencer, will go to London in pursuit of the gold that he believed could have been his four years ago. 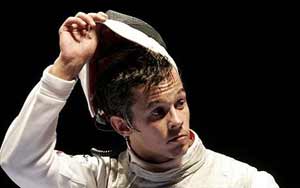 Andrea Baldini, the former world top-ranked men's foil fencer, will go to London in pursuit of the gold that he believed could have been his four years ago.

The Italian fencer was ranked world No.1 in 2008 and was confident to win an individual gold at the Beijing Olympic Games, reports Xinhua. But an inexplicable doping accident shattered all his hopes.

He was suspended by the Italian Olympic Committee (CONI) Aug 1, 2008 after testing positive for a diuretic called Furosemide.

"At first I did not believe it was true. I thought I could prove my innocence in time for the Beijing Olympics," he recalled.

"But when I was told that Andrea Cassara had been called up to take my place in the Olympic team, I realized what happened," he said.

The 26-year-old was sure he fell victim to a plot that could have been intended to stop him going to the Beijing Olympics.

"It was a clear conspiracy against me, probably to keep me out of the Beijing Games," he said.

With the help of a competent lawyer, Baldini reclaimed his innocence after the Beijing Olympics.

"No one was ever found responsible for this accident as we could not find out who did this to me," he said.

After four years, the former world champion, though ranked 13th in the world, found himself better equipped to win the Olympic gold.

"Four years were not too long, and I could manage to stay focused. I was once thought I could never be able to come back to the top level, " he said. "After I proved innocent, I started working with London in mind."

"I think I am a different person in a good position to win. I have more experience and know how to control myself and my match," he added. "Now I am wholly focused on the London games."

He will start his campaign in London as an Olympic debutant. But the former world and European champion did not rate him as an underdog.

Baldini could meet his teammate Cassara, world No.1, and the other teammate Valerio Aspromonte, world No.2, and other formidable opponents on his way to the individual gold at the London Olympics.

"And I honestly I don't care whom I will compete against," he said. "It's Olympics where anything could happen. So the most important thing is that I am focused and at top form. Then I could beat whoever facing me," he added.

Baldini reckoned himself enjoy some advantage against big-sized opponents.

"Physically I am small and what I know best is to use the right timing to attack. So the physically bigger and stronger fencers are slower and an easier target for me," he said.

Though an Olympic debutant, Andrea Baldini will turn 27 this December, and he knows London could be his last chance to win an Olympic gold.

"I want to win this time because I can't think that I might have another opportunity. In 2016 I will be 30 and I have no idea on where I will be," he said.