If Felix Sanchez had lived in the Dominican Republic, he may have become a speedy outfielder in Major League Baseball. 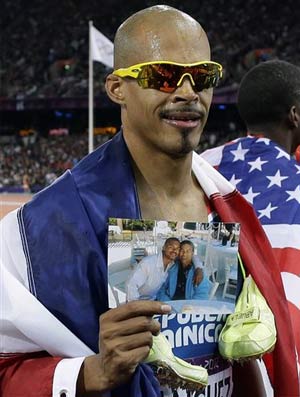 If Felix Sanchez had lived in the Dominican Republic, he may have become a speedy outfielder in Major League Baseball.

But fate sent him on another path, far from the Caribbean country. Sanchez, who grew up in the United States, won an Olympic gold medal for Dominican Republic in the 400-meter hurdles at the London Games just days short of his 35th birthday.

He was a member of the Dominican 4x400-meter relay team that was disqualified on Thursday. But that hasn't tarnished the Olympic success of 11 Dominican athletes at the London Games. In addition to Sanchez's gold, Luguelin Santos won a silver medal in the 400.

Although both of the medal winners competed for the Dominican Republic, their development as athletes was forged outside the country.

The success of Sanchez, born in New York to Dominican parents, is down to his development in the United States. And seven other Dominicans at the London Games, including Santos, live on the neighbouring island of Puerto Rico. They have scholarships to study and train at universities there.

It's not easy to develop in athletics in a country that is crazy about baseball.

"Luguelin (Santos) was a boy. We trained every day dreaming that one day we were going to get some opportunity," said 200-meter runner Carlos Jorge, a friend of Santos. The friends grew up training on a baseball field because of a lack of facilities in his hometown of Bayaguana.

"Obviously, the conditions for (training) of this sport are not the same that baseball has, for example, but Sanchez's successes have motivated many of us," he added.

Their coach, Jose Rubio, believes the Dominican Republic has the talent to compete with countries like Jamaica, Trinidad and Tobago, Cuba and the Bahamas, not only in
athletics, but in other sports.

"There's been an effort to recruit those talents and little by little, they have been developing and we are already mseeing the results of the work being done in Dominican athletics," he said.