A day after Wembley Arena was in an uproar over Olympic badminton doubles matches being deliberately thrown, there was no whiff of manipulation as the knockout rounds began on Wednesday. 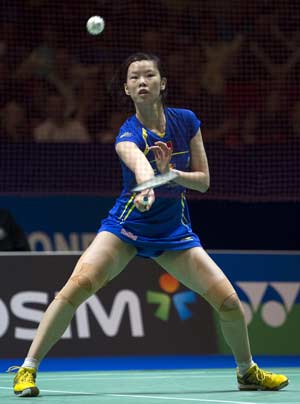 A day after Wembley Arena was in an uproar over Olympic badminton doubles matches being deliberately thrown, there was no whiff of manipulation as the knockout rounds began on Wednesday.

The nearly full arena was still buzzing after a farcical display the previous night when China's world champion women's duo and pairs from South Korea and Indonesia purposely lost points in their final group matches to earn favorable draws in the last 16.

All four pairs faced a Badminton World Federation hearing early on Wednesday, charged with not trying their best and embarrassing the sport.

Meanwhile, the hottest player on the tour, Li Xuerui of China, was first into the quarterfinals. The third seed was given a tough workout in edging Tai Tzu-ying of Taiwan 21-16, 23-21 in 46 minutes. Tai saved five match points and had a game point but couldn't recover a Li drop shot.

Tai hit an attempted drop wide to give away her sixth match point, and Li finally cashed it in with a smash which left Tai sprawled face down on the court.

The win was the 33rd in the last 34 matches for Li, who was picked by China ahead of Asian Games champion Wang Shixian less than three weeks ago.

On the men's side, Parupalli Kashyap of India needed more than an hour to put away Niluka Karunaratne of Sri Lanka 21-14, 15-21, 21-9 in a match involving unseeded players.

Comments
Topics mentioned in this article
Olympics 2012 Badminton
Get the latest updates on ICC T20 Worldcup 2022 and CWG 2022 check out the Schedule, Live Score and Medals Tally. Like us on Facebook or follow us on Twitter for more sports updates. You can also download the NDTV Cricket app for Android or iOS.