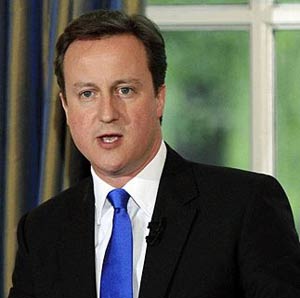 Prime Minister David Cameron will hold discussions on Thursday in London with Russian President Vladimir Putin, but appears likely to focus on boosting trade, rather than anger over Moscow's sheltering of Syrian President Bashar Assad's regime from tougher international action.

With relations thawing since the end of a five-year freeze on top-level contacts between Britain and Russia, Cameron also is planning to take Putin to London's Olympic Park to see matches in the Russian leader's beloved judo competition.

The visit by Putin, an honorary president of the International Judo Federation, will be his first to Britain since he was reinstalled as Russia's chief in May and follows talks with Cameron on the sidelines of May's G-20 meeting in Mexico.

Cameron will push Putin over Russia's refusal to back a new resolution at the United Nations aimed at helping to halt Syria's violence. Britain called the decision by Russia and China to veto a resolution two weeks ago "inexcusable and indefensible."

But, as with much of Britain's frantic round of Olympic diplomacy - aimed at winning 1 billion pounds (US$1.6 billion) in new trade on the back of the Summer Games, talks will stress efforts to increase the country's exports to Russia.

"We will be at the judo, so it may be a bit off-putting, but nonetheless, I know my major priority is to get those trade deals to get that investment and not to concentrate on what's happening on the mat," Cameron said last week, addressing an audience of business leaders.

Relations between Britain and Russia soured over the 2006 poisoning death of dissident ex-Russian security agent Alexander Litvinenko in London. Litvinenko made a deathbed statement accusing Putin of authorizing his killing.

Russia has refused repeated British requests for the extradition of the chief suspect in the case, ex-KGB agent Andrei Lugovoi, who denies any involvement.

Intelligence cooperation between Britain and Russia remains suspended as a result of Litvinenko's killing.

Leaders of the two countries didn't meet for five years as a result, but in a visit to Moscow last September Cameron acknowledged that the two nations must set aside their disputes to nurture new trading ties.

"This issue hasn't been parked, the fact is that the two governments don't agree," Cameron told reporters.

During that visit, Putin - then Russia's prime minister - cast doubt on Britain's aims of strengthening trade links. He said Britain's investments "in the real sector of the economy are rather modest."

Cameron's office said it was not yet known which judo matches the leaders would watch on Thursday.

Tagir Khaibulaev, 28, from Dagestan, and Britain's James Austin, 29, from Burton-upon-Trent, in central England, are both competing Thursday in the men's sub-100kg judo category. Russian Vera Moskalyuk, 30, and Londoner Gemma Gibbons, 25, will fight in the women's sub-78kg category.