Great Britain's Beth Tweddle says she wants to put on a rousing show for home fans at the Olympics, after revealing that her gymnastic floor routine will be soundtracked by a James Bond theme song. 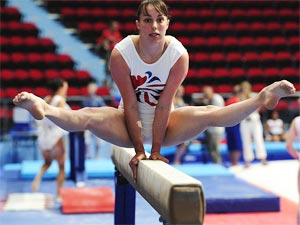 Great Britain's Beth Tweddle says she wants to put on a rousing show for home fans at the Olympics, after revealing that her gymnastic floor routine will be soundtracked by a James Bond theme song.

Tweddle took to the floor during training at the North Greenwich Arena on Thursday and produced a routine accompanied by 'Live and Let Die', the theme song to the 1973 Bond film of the same name.

The song was written by Sir Paul McCartney, the former Beatle and British icon, who will star at Friday's opening ceremony at the Olympic Stadium.

Tweddle said she was motivated by the idea of putting on a patriotic performance in front of British fans, and explained that discussions with music label Apple, which owns the rights to the music, started in 2011.

"I wanted to make a big impression on the London public. It's in my home town," she said.

"It took a while. Last year we started trying to apply to get the licence to be able to use the music and eventually they agreed to allow us to do it, as long as they heard the final version of the composition.

"They emailed prior to the Games to ask what day I'd be on, so that they could come and watch it.

"It's really nice that I've got something big and British, and hopefully a lot of the British crowd will get involved and clap along."

A three-time world champion, 27-year-old Tweddle will embark on an Olympic campaign for the last time when qualifying for the women's event gets under way on Sunday.

The North Greenwich Arena holds happy memories for Britain's greatest ever gymnast, as it was at the same venue that she won floor gold at the 2009 World Championships.

Three years on, she will hope to medal on both the floor and the uneven bars -- her speciality -- but her chances of success were placed in jeopardy in May when she had to undergo keyhole surgery on a knee problem.

Now fully fit, she says the period of rehabilitation helped her avoid being subjected to too much attention.

"Obviously there is pressure, but I think every British athlete in this country right now feels a little bit of pressure, with it being in our country," she said.

"In a way the injury has kept me out of the limelight. I've sort of gone under the carpet for a while, just preparing for this.

"I haven't competed as much as people maybe would have expected but we're happy, we're confident, and we've got a good support network around us that are keeping us on the ground."

Tweddle says that she and her fellow British gymnasts have been able to gauge the growth of Olympic fever in Britain via social media, but says they have been insulated from the excitement by their routines in the Olympic Village.

"We're in our own bubble," she said. "A lot of us are starting to put Twitter and Facebook to one side and not tweet as much, just because our phones go mad otherwise.

"To be honest, because we're in the village, you get on the bus, you come here (to the arena), you go back to the village, and you're in a little bubble.

"But I'm sure that, around the country, it's probably getting quite mad, and with the opening ceremony tomorrow (Friday), it's going to be the start of an amazing two weeks."