Bolt's warning: Will party, will run and will win medals

Jamaica's Usain Bolt warned he was "ready to go again" on Monday in search of more Olympic gold after celebrating into the small hours following his classic 100m win. 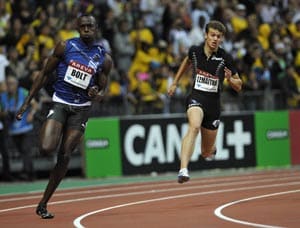 Jamaica's Usain Bolt warned he was "ready to go again" on Monday in search of more Olympic gold after celebrating into the small hours following his classic 100m win.

Bolt, who answered his critics by running 9.63sec, the second-fastest time ever behind his own world record, tweeted a picture overnight of himself with three Swedish women handballers in the athletes' village.

But by mid-afternoon, he posted another picture of him sitting on his unmade bed and holding up three fingers, representing the three sprint titles he is defending in London.

"I am up and ready to go again," was the message.

Bolt's one-two finish with team-mate Yohan Blake, celebrated wildly in Jamaica during parties for the country's independence day, wrote his name in the list of athletics legends.

The show-boating, 1.96m (six-foot-five) runner became the first man since US great Carl Lewis to win the 100m at consecutive Games. Lewis claimed his second when Canada's Ben Johnson was disqualified for doping.

Bolt will now attempt to become the first man to win both the 100m and 200m twice in a row, and he will also defend Jamaica's title in the 4x100m relay. The 200m heats are on Tuesday.

Former world judo champion Edith Bosch said she tackled a man who threw a plastic bottle onto the track, landing just behind Blake, as the 100m started. The man, a vending-machine technician from northern England, was later arrested.

"I got furious and gave him a hard slap on the back," said Bosch.

Italy's reigning 50km walk champion Alex Schwazer has been withdrawn from the Olympics for failing a drugs test, a source with knowledge of the case told AFP.

Separately, American judoka Nicholas Delpopolo was kicked out after admitting eating food spiked with marijuana -- although he said it was a "mistake". Delpopolo, 23, had finished seventh in the men's 73kg category.

"The athlete explained his positive test was caused by his inadvertent consumption of food (prior to his leaving for the London Olympic Games) that he did not realize had been baked with marijuana," the IOC said.

"The athlete apologised to the USOC (United States Olympic Committee), his team-mates and his fans and indicated that he was embarrassed by his mistake."

Algeria's 1500m medal contender Taoufik Makhloufi was also disqualified for the unusual offence of not trying hard enough in his 800m heat, which he did not finish. Makhloufi had won his 1500m semi-final.

And hosts Great Britain pushed their title haul to 18 with victory in the team show jumping and individual men's sprint in deafening noise at the Olympic Park Velodrome.

The 30-year-old world record-holder, who has suffered some bitter defeats during the last three seasons, sailed through qualification, needing only two vaults to secure safe passage to the final.

Victory on Monday will make her the first woman to win an individual athletics discipline three times at the Games, although Veronica Campbell-Brown has a chance to do so later in the Olympics in the 200m.

Isinbayeva is expected to cruise to gold after world champion Fabiana Murer and Svetlana Feofanova, who won silver in Athens and bronze in Beijing, failed to qualify.

"I'm through to the semi-final round now, I want to get it done and dusted," said Pearson.

Eighteen golds were to be decided on Monday, which is day 10 out of 16.

Comments
Topics mentioned in this article
Athletics USA Seoul Stadium Los Angeles Memorial Coliseum Olympics 2012
Get the latest updates on ICC T20 Worldcup 2022 and CWG 2022 check out the Schedule, Live Score and Medals Tally. Like us on Facebook or follow us on Twitter for more sports updates. You can also download the NDTV Cricket app for Android or iOS.