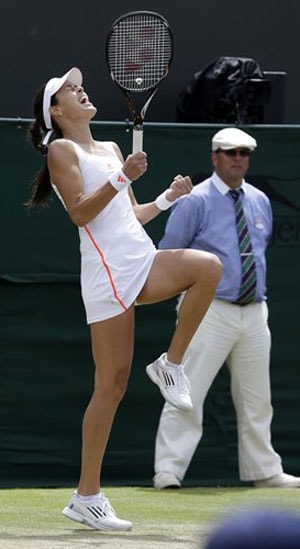 Sixth-seeded Tomas Berdych lost in straight sets to Steve Darcis of Belgium on Saturday in the first round of Olympic play at Wimbledon.

Darcis won 6-4, 6-4, with solid serving and groundstrokes. On matchpoint, he hit a series of crosscourt backhand slices before the Czech lofted a ball out.

Berdych reached the Wimbledon final in 2010, losing to Rafael Nadal. Darcis, ranked 75, reached his career-high ranking of 44 in 2008.

Christina McHale of the United States lost to Ana Ivanovic 6-4, 7-5 Saturday in the first round of the Olympics at Wimbledon.

McHale hit a backhand into the net on match point against the 11th-seeded Serb, who won the French Open in 2008.

Comments
Topics mentioned in this article
Tennis Ana Ivanovic Radek Stepanek Guillaume Rufin Jo-Wilfried Tsonga Tomas Berdych Kevin Anderson Christina McHale Olympics 2012 Steve Darcis
Get the latest updates on India vs Australia Series, check out the India vs Australia Schedule for 2020-21 and Ind vs Aus live score . Like us on Facebook or follow us on Twitter for more sports updates. You can also download the NDTV Cricket app for Android or iOS.