The International Olympic Committee (IOC) on Wednesday said badminton players throwing matches at the London Olympics to secure a favourable fixture was "not acceptable". 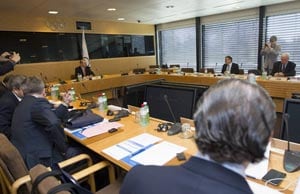 The International Olympic Committee (IOC) on Wednesday said badminton players throwing matches at the London Olympics to secure a favourable fixture was "not acceptable".

The Badminton World Federation said in a statement on Wednesday it had charged eight women's doubles players from China, South Korea and Indonesia under its players' code of conduct for "not using one's best efforts to win a match" and "conducting oneself in a manner that is clearly abusive or detrimental to the sport" in matches played on Tuesday night at the Wembley Arena, Xinhua reports.

IOC spokesman Mark Adams said the incidents were "not acceptable", but what sanctions the players face was up to badminton's governing body.

"The federation is taking very swift action and we expect them to take the correct course," Adams told a daily press briefing.

Meanwhile, Sebastian Coe, chairman of the London Organising Committee for the Olympics (LOCOG), called this matter "depressing", saying "who wants to sit through something like that?"

But Paul Deighton, chief executive officer of the LOCOG, said there would be no refunds for those who bought tickets to watch Tuesday's badminton sessions.

Adams said the IOC thinks they are "a long, long, long way away" from determining the sport's status in the Games.

"I think it's really premature while a disciplinary committee is still sitting to try to decide whether they have taken the right or wrong decision when they haven't actually taken the decision yet," he added.

Comments
Topics mentioned in this article
Olympics 2012 Badminton
Get the latest updates on ICC T20 Worldcup 2022 and CWG 2022 check out the Schedule, Live Score and Medals Tally. Like us on Facebook or follow us on Twitter for more sports updates. You can also download the NDTV Cricket app for Android or iOS.