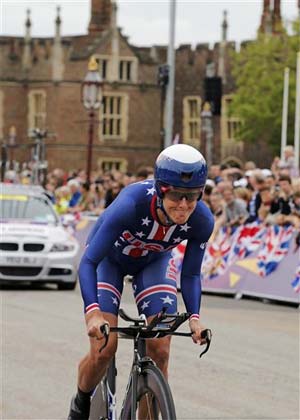 Armstrong covered the 29-kilometer (18-mile) course south of London in 37 minutes, 34.82 seconds. Arndt finished in 37:50.29, while Olga Zabelinskaya of Russia posted a time of 37:57.35 to add another bronze medal to the one she captured in Sunday's road race.

The 38-year-old Armstrong briefly retired after her triumph in Beijing to start a family, but she hopped back on her bike after delivering her son Lucas in 2010.

The two-time world champion looked as if she'd never been away.

Armstrong had already gained a second on the field by the first time check, and by the time she reached the second checkpoint at the 12.5-mile mark, the lead had swelled to nearly five seconds.

Armstrong knew she was headed for another gold medal when she started to pick off riders on the run-in to the finish, including Dutch champion Marianne Vos, who won gold in the road race.

The famously stoic Armstrong let a smile slip as she crossed the finish line, slowing to a stop and then slumping over her bike. She rested just enough to catch her breath before heading to the victory stand and her second consecutive Olympic gold medal.

"When she stopped she was on top. You don't lose what you've got," said Armstrong's teammate Amber Neben, who finished seventh. "You don't lose the fact that you're a great bike racer."

The mostly flat course that Armstrong turned into her own personal playground began at Hampton Court Palace, the 16th century court that was once favored by Henry VIII.

The race meandered through countryside, twice crossing the river Thames, before finishing back at the palace. Riders who were in a position to medal were ushered onto the so-called "hot seats" - three gilded thrones - to wait out the rest of the riders.

Zabelinskaya spent much of the afternoon on the leader's throne.

The Russian time trial champion was the 10th of 24 riders to leave the start tent, and posted a time that was more than 2 minutes better than the next-fastest had crossed the line.

All the big names were still on the course, though.

Linda Villumsen of New Zealand turned some heads when she crossed the first check point about a second slower than Armstrong, and the world silver medalist was still the second-fastest on the course when she reached the second time check.

She struggled over the final leg and finished fourth, less than two seconds off the podium.

Arndt was considered the biggest challenge to Armstrong after her time trial victory at the world championships, but she was only fifth-fastest at the opening time check. She managed to pick up her pace over the final 12 miles to earn the silver medal.