Zara Phillips, who missed out on competing at the 2004 and 2008 Olympic Games when her star horse Toytown limped out with injury, is counting on no similar ill-luck befalling her at London 2012. 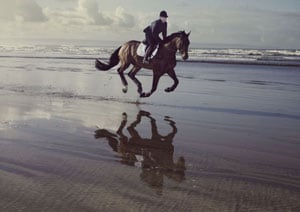 Zara Phillips, who missed out on competing at the 2004 and 2008 Olympic Games when her star horse Toytown limped out with injury, is counting on no similar ill-luck befalling her at London 2012.

Phillips is making her Games debut in Team GB's eventing squad after scheduled appearances at Athens and Beijing were frustratingly scuppered at the eleventh hour.

The 31-year-old grand daughter of Queen Elizabeth II earned selection for 2012 after finishing third at the Bramham Horse Trials in June with High Kingdom.

"I've had High Kingdom for a long time - he's a very different character to Toytown," Phillips told the BBC on Thursday.

She expressed slight concern over High Kingdom's prowess in dressage which with cross country and show jumping makes up the eventing competition.

"Every time you get a horse you need to build up a relationship. He's getting better and better in dressage - that's his weakest phase.

"Hopefully, he's going to improve in the next couple of weeks," said the 2006 world champion.

Reflecting on the need for High Kingdom to avoid injury in the two weeks leading up to the start of competition at Greenwich Park on July 28 Phillips added: "You want to stop anything from happening but still try to get to a peak performance level.

"But animals do stupid things, it's part of the sport unfortunately."

Phillips is maintaining a strong family tradition at the Olympics, her mother Princess Anne having competed at the 1976 Games and her father Captain Mark Phillips winning gold four years earlier in Munich.