The echoes of the 1960 Olympics defeat could be heard in Tokyo where the Indian hockey team was not expected to win, at least according to the Indian media that doubted whether the gold medal could be regained given Pakistan's ascendency. 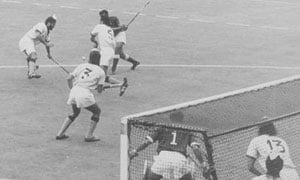 The echoes of the 1960 Olympics defeat could be heard in Tokyo where the Indian hockey team was not expected to win, at least according to the Indian media that doubted whether the gold medal could be regained given Pakistan's ascendency.

Yet, the Doubting Thomases were proven wrong by the Indian side that contained one Udham Singh Kullar who matched the feat of Leslie Claudius of playing in his fourth Olympics. Udham played in just one match as Bandu Patil and Hari Pal Kaushik shared the inside-left position.

After the tournament, Inder Mohan Mahajan who accompanied the side as the manager, came down hard on the "anti-India propaganda" in which he claimed the Indian media itself was a willing participant.

"Our Indian press correspondents in Tokyo had particularly become hostile and were sending false dispatches back home on the performance of the team. It was reliably learnt that the foreign countries won them over by paying them handsomely. They kept the people in India completely in the dark about our performances in various matches," wrote Mahajan in his report.

Despite the off-the-field hassles, the Indian team displayed great character to qualify for the medal round and eventually beat Pakistan in the final. By then, the team had played nine matches in 12 days.

In the eight-team pool, India won all but two of the seven matches as they drew with Germany and Spain to qualify for the semifinals, where they came up against favourites Australia. Two penalty corner goals in three minutes by Prithipal Singh and in between a strike by Mohinder Lal gave India a 3-1 victory and a berth in the final against Pakistan.

The gold medal match witnessed some fast, furious and exciting hockey with Pakistan dominating the early part before the Indians went on the offensive. After a blank first-half, India received a penalty stroke after Prithipal's penalty corner shot struck defender Munir on the foot. Mohinder converted the stroke for the match-winner.

The Indian players celebrated the victory with an impromptu Bhangra dance amidst emotional scenes while the Pakistan team members trooped out with their heads bowed in defeat.

Comments
Topics mentioned in this article
Hockey Olympics 2012 India
Get the latest Cricket news, check out the India cricket schedule, Cricket live score . Like us on Facebook or follow us on Twitter for more sports updates. You can also download the NDTV Cricket app for Android or iOS.