The team selection ahead of the 1952 Games was marred by such controversy that India looked destined to return home from Finland empty handed. 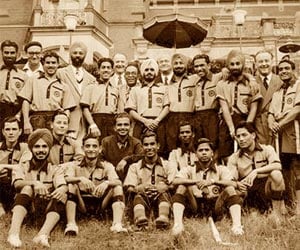 The team selection ahead of the 1952 Games was marred by such controversy that India looked destined to return home from Finland empty handed. There was a near-riotous situation concerning the inclusion and omission of players to an extent that the critics wrote off the team, led by Kunwar Digvijay Singh 'Babu', as a bunch of no-hopers despite India having won four gold medals at consecutive Olympics.

'Babu' was at his wit's end as the team played a few matches at home and was even beaten 0-1 by a Madras XI with Susainathan scoring the lone goal that cruelly exposed the tottering defence. The forward subsequently lost his front row teeth following a collision with one of the defenders, but by then, the damage had been done.

Thus, it was with some relief that the team left Indian shores to Copenhagen, Denmark, for the pre-Olympic camp and in a bid to acclimatise to the Nordic weather conditions. The move was probably the best thing that the beleaguered team could have done.

To top it, in a moment of panic, centre-forward C.S.Gurung was rushed to Helsinki, but his presence hardly mattered as he did not get to play even a single match.

With 13 teams in the fray, the competition was held on a knock-out basis with India, Pakistan and Great Britain receiving a bye into the second round (quarter-finals).

For all the pre-Games turmoil back home, the Indian team put on a classy display by defeating Austria 4-0, Great Britain 3-1 in the semi-final and outclassing Holland 6-1 for their fifth gold medal in a row.

'Babu' was the toast of the tournament as also Bablir Singh who fired nine of the 13 goals that India scored in the competition 'Babu' was decorated with the 'best sportsman of Asia' and also the 'best hockey player in the word' titles.

Comments
Topics mentioned in this article Hockey Olympics 2012 India
Get the latest Indian Premier League 2020 news, check out the IPL 2020 schedule, Cricket live score . Like us on Facebook or follow us on Twitter for more IPL 2020 updates. You can also download the NDTV Cricket app for Android or iOS.
Related Articles