It was a wonder that India managed to field a team for the 1948 Olympics which were held on the conclusion of the World War II and a year after the traumatic partition that threw the sub-continent into a massive turmoil. 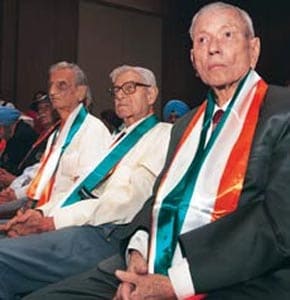 It was a wonder that India managed to field a team for the 1948 Olympics which were held on the conclusion of the World War II and a year after the traumatic partition that threw the sub-continent into a massive turmoil. But a record fourth gold medal brought back smiles on the faces of the people, who were struggling to rebuild their lives in the aftermath of the partition.

However, the Indian Hockey Federation (IHF) with Naval Tata as its president, worked overtime to put together a team that represented a new generation of players, all of whom were set to make their Olympic debut, and some destined for greatness. A suggestion to field a joint India-Pakistan team had no takers and the two countries decided to form separate squads.

There were as many as eight players from Bombay in the squad led by Kishan Lal of the Railways. The contingent also included the likes of Leslie Claudius who went on to play four Olympics and Balbir Singh (Punjab) who became a legend in his own right.

In fact, Balbir starred in India's 8-1 win against Argentina by scoring six goals. However, he was dropped for the next two games in which his absence manifested itself when India struggled to beat Spain 2-0 (quarterfinals) and Holland 2-1 (semifinals).

Balbir's replacements, Nandy (Grahanandan) Singh and Gerry Glacken who came on to the pitch only moments before the bully-off, were no match for the wily centre-forward who was brought back for the final against Britain following an uproar and he promptly marked his presence by scoring two of the four goals as India won 4-0 for their fourth consecutive Olympic gold medal.

The ground conditions for the final that was played immediately after the Pakistan-Holland bronze medal game, were wretched, but Balbir sent India on their way with a goal early in the match and another just before half-time. Pat Jensen and Trilochan Singh scored one apiece on resumption as Independent India retained their hockey crown.

Incidentally, Nandy Singh himself was a late replacement for Reginald Rodrigues who was quarantined on arrival in London due to a throat infection. Rodrigues was also involved in another incident during the ship journey to London.

Rodrigues, after being disciplined by manager A.C. Chatterjee, sneaked into the official's room, took the costly presents and the wallet containing documents and traveller's cheques, and threw them into the sea. Joint Manager Pankaj Gupta investigated and identified Rodrigues as the culprit.

Comments
Topics mentioned in this article
Hockey Olympics 2012
Get the latest updates on IPL 2020, check out the IPL Schedule for 2020 and Indian Premier League (IPL) Cricket live score . Like us on Facebook or follow us on Twitter for more sports updates. You can also download the NDTV Cricket app for Android or iOS.