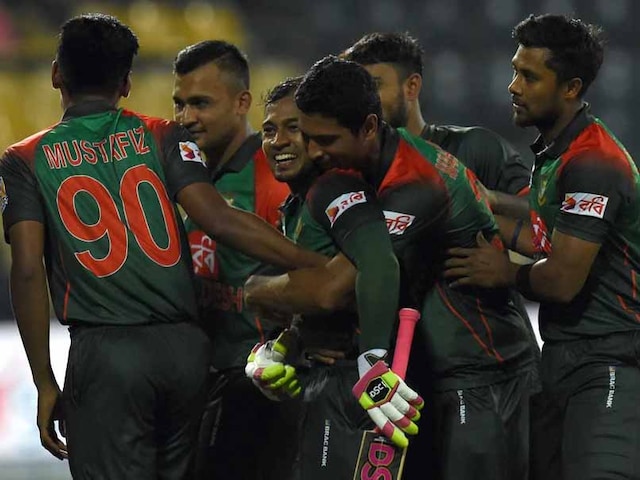 Highlights, Sri Lanka vs Bangladesh: The match was played at Colombo.© AFP

Bangladesh pulled off a sensational two-wicket victory over Sri Lanka under dramatic circumstances to set up a summit clash against India in the Nidahas Twenty20 cricket tri-series on Friday. Mahmudullah (43 not out) struck a stunning six in the penultimate delivery to reach to the target of 160 to the wild celebration of the Bangladesh camp after tempers were frayed due to debatable decisions from the umpires. The match at the R Premadasa Stadium was marred by drama at the fag end of the virtual semifinal as Bangladesh captain Shakib Al Hasan gestured to his two batsmen to come out of the field apparently in protest against giving a run-out decision to Mustafizur Rahman on a seemingly shoulder-height ball. But better sense prevailed in the end after arguments between the players of the two sides and intervention by match officials. Bangladesh, who have also beaten the same opponents earlier in the tournament, secured four points from four matches to enter the final. India, with six points from four matches, have already qualified for the summit clash to be played at R Premadasa Stadium on Sunday. Sri Lanka finished last with two points. (Scorecard)

Earlier, Captain Thisara Perera and Kusal Perera struck half centuries as Sri Lanka recovered from a top-order batting collapse to post a competitive 159 for 7 against Bangladesh. Put into bat, Sri Lanka were in all sort of trouble early in their innings against the Bangladeshi bowlers, led by young left-arm pacer Mustafizur Rahman whose incisive pace spell rocked the home side batsmen. But the Perera duo, Thisara (58) and Kusal (61) showed their mettle with a fine counter-attacking batting display to take their side past the 150-run mark. Sri Lanka were 41 for 5 in the ninth over and they were staring at a meagre total but Thisara and Kusal had other ideas as the duo flayed the Bangladesh bowlers at the later stages of their innings.

Kusal ,who scored his third half century of the tournament, needed 40 deliveries for his 61. He hit seven fours and one six. Thisara, on the other hand, faced 37 balls for his 58 and struck three fours and as many sixes. Bangladesh were, however, on top initially with their bowlers, led by Mustafizur Rahman (2/39), creating havoc on the home side top-order batsmen. The 22-year-old Mustafizur, who was bought by Mumbai Indians for Rs 2.2 crores for the upcoming IPL season, had in-form Kushal Mendis (11) in the fourth over and then dimissed Dasun Shanaka (0) in his next over. At one stage, his figures read 2-1-4-2.

Catch highlights of the match between Sri Lanka and Bangladesh straight from Colombo:

22:35 IST: Thank you for joining us for the live blog. DO tune back in when India take on Bangladesh on March 18 for the final of the Nidahas Trophy 2018.

22:31 IST: SIX! Mahmudullah clips a full delivery for a maximum on the leg-side. Bangladesh win the match by two wickets.

What a match! Bangladesh beat Sri Lanka by 2 wickets and reached the final of Nidahas Trophy 2018. pic.twitter.com/M6UipajKUI

22:26 IST: Shakib is calling his batsmen back to the pavilion after a scuffle between the players regarding the height of the ball. However, after a brief halt, the play in underway.

22:23 IST: OUT! Mustafizur departs for a duck on the second ball of the last over. Bangladesh still need 12 runs in 4 runs.

22:04 IST: SIX! Mahmudullah smokes Jeevan Mendis for a maximum straight down the ground.

22:00 IST: FOUR! Mahmudullah slams Gunathilaka straight down the ground for a boundary.

21:57 IST: OUT! Soumya Sarkar departs for 10. Jeevan Mendis gets his first wicket.

21:35 IST: FOUR! Short and wide from Udana, Mushfiqur cuts it with great power for yet another boundary.

21:27 IST: SIX! Huge maximum from Tamim Iqbal off Akila Dananjaya. The Bangladeshi came down the track, got to the pitch of the ball and went through with the lofted hit.

21:14 IST: FOUR! Mushfiqur Rahman comes down the track and slaps Aponso for a boundary.

20:52 IST: Tamim Iqbal and Liton Das are opening the batting for Bangladesh. Nuwan Pradeep is opening the bowling for Sri Lanka.

20:31 IST: SIX! Thisara Perera smokes Soumya Sarkar for a maximum straight down the ground. He also brings up his maiden T20I fifty.

20:28 IST: WICKET! Kusal Perera departs after a well made 61. Soumya Sarkar gets his first wicket.

20:10 IST: Trivia -- Kusal Perera, with 5 fifties against Bangladesh, now has the most 50+ scores versus an opponent in T20Is. Kohli (vs Aus & SL), Dilshan (vs WI), Gayle (vs Aus), Guptill (vs Pak), Shahzad (vs Ire) and Pietersen (vs Pak) are joint-second with four half-centuries.

20:03 IST: Six and Four! Kusal Perera is taking the attack to the opposition. First the big heave straight down the ground and then cuts a short ball over point for a fine boundary.

WICKET! Mustafizur gets his second! Shanaka gone for 0. Sri Lanka are 32/4 in 5.4 overs.#BANvSL #NidahasTrophy2018 pic.twitter.com/Uo1vzQH4dg

19:25 IST: FOUR! Short and wide from Mehidy Hasan, Tharanga slams it for a boundary.

19:12 IST: FOUR! Kusal Perera, the new man in, starts off with a boundary on the off-side. Short and wide, Kusal Mendis frees his arms and slams the ball towards the boundary ropes.

19:00 IST: Danushka Gunathilaka and Kusal Mendis are opening the batting for Sri Lanka. Shakib al Hasan is opening the bowling for Bangladesh.

18:55 IST: Both teams are on the ground for their respective national anthems.

Bangladesh have won the toss and opted to bowl first against Sri Lanka.#BANvSL #NidahasTrophy2018 pic.twitter.com/eY4g1tAjJB

18:15 IST: Hello and welcome to the live blog of the match between Sri Lanka and Bangladesh.

The home side will rely on the batting efforts of Kusal Mendis, who has been in good form, along with Kusal Perera, Upul Tharanga and skipper Thisara Perera. Bangladesh will be aiming for more consistency from their top-order which delivered in one game but disappointed in a couple of other matches against India.