After his match-winning knock, Dinesh Karthik explained the reason behind keeping his calm in such pressure-cooker situation. 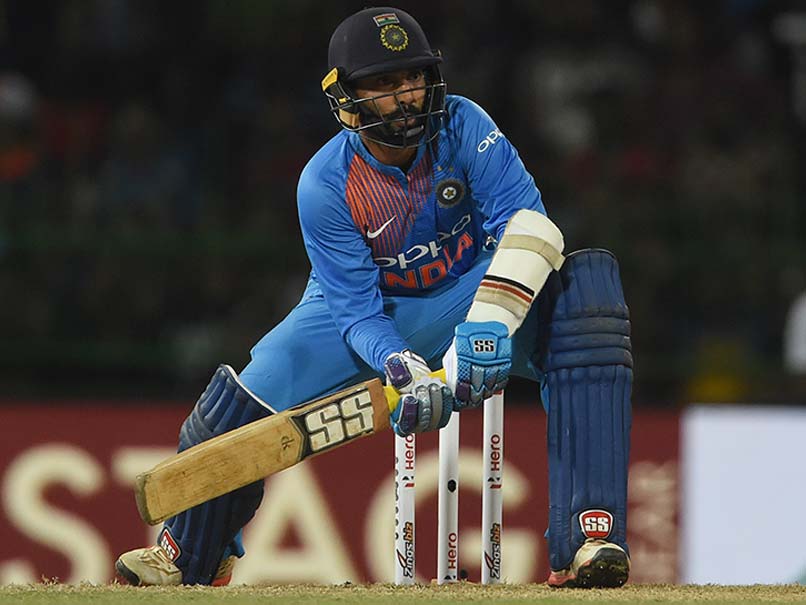 Karthik played a brilliant cameo towards the end as India clinched a nail-biting thriller.© AFP

India's wicket-keeper batsman Dinesh Karthik played a brilliant cameo towards the end as clinched a nail-biting thriller, beating Bangladesh by four wickets in the final of the Nidahas Trophy T20 tri-series at the R Premadasa Stadium in Colombo on Sunday. The right-hander smashed 29 runs off eight balls to gift India a memorable win. After his match-winning knock, the 32-year old explained the reason behind keeping his calm in such pressure-cooker situation. "I have been practising these shots - where I hold a good base and swing through the line well and it came off well today," Karthik said after a match-winning innings.

Coming in the second last over with scoreboard reading 133 for 5, Karthik announced his arrival at the crease through two sixes and a four in first three balls which narrowed the gap between remaining balls and required runs.

The drama unfolded in the last over when India needed five runs in the last ball. Kathik slammed a flat six over extra cover to clinch the issue.

"I realised that it wasn't that easy to bat, the way Mustafizur bowled that over, all I needed to do was to go for boundaries as soon as I went in. Touchwood some of the balls landed in a good place for me to hit a shot," Karthik said.

"Really happy to come out of this performance, really happy for the team - young bunch of boys. We have played some good cricket throughout this tournament and had we not won this final, wouldn't have done justice to the way we have played this tournament," Karthik, who smashed three sixes and two boundaries in his knock, said.

The 32-year-old Karthik, who played 23 Tests, 79 ODIs and 19 T20Is for India, also spoke about the struggle behind finding a place in the eleven.

"I have been saying this over and over again, the Indian team right now is a tough place to get an opportunity but once you get it - you got to make best use of the opportunity," Man of the Match Karthik said.

Karthik will be leading Kolkata Knight Riders in the 11th edition of the Indian Premier League (IPL).

Comments
Topics mentioned in this article
India Cricket Team Bangladesh Cricket Team Dinesh Karthik Nidahas T20 Tri-Series Cricket
Get the latest updates on T20 World Cup, check out the T20 World Cup Schedule and Live Score . Like us on Facebook or follow us on Twitter for more sports updates. You can also download the NDTV Cricket app for Android or iOS.