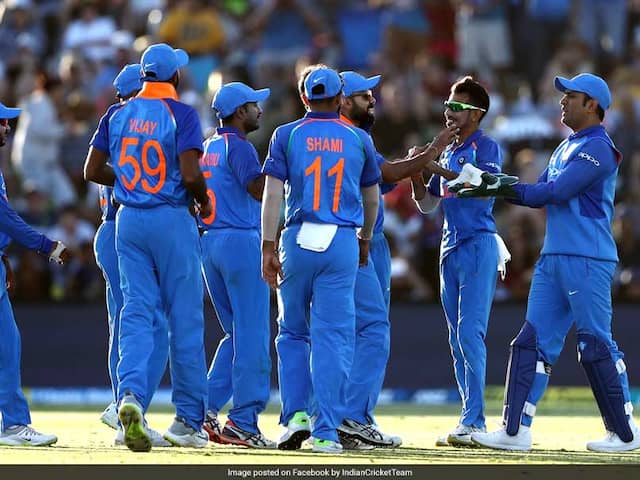 The Indian cricket team is in top form against New Zealand.© Facebook

The Indian cricket team is in top form, having registered emphatic victories over hosts New Zealand in the first-two One-Day Internationals (ODIs) of the five-match series. The visitors clinched an eight-wicket win in Napier before defeating the hosts by 90 runs at Bay Oval on Saturday. While the hosts are having a difficult time on the field, the Eastern District Police showed great spirit and warned the local public about the Indian cricket team. The Eastern District Police took to their official Facebook account to issue a hilarious warning.

In the warning note they wrote, "Police would like to issue a warning to members of the public about the exploits of a group touring the country at the moment. Witnesses report seeing this group badly assault an innocent looking bunch of New Zealanders in both Napier and Mt Maunganui in the last week. Extra care should be taken if you are carrying anything that looks like a cricket bat or ball."

New Zealand struggled with their all-round performances in both the ODIs. In Napier, the hosts were bowled out for 157 runs while at Bay Oval they could only manage to put 234 runs on board.

New Zealand's bowling has also been underwhelming with Indian batsmen running riot in both the ODIs.

However, in the third ODI at the Bay Oval in Mount Maunganui, it will be chance for New Zealand to save the series in which they currently trail 0-2.

New Zealand Cricket Team New Zealand vs India Cricket
Get the latest Cricket news, check out the India cricket schedule, Cricket live score . Like us on Facebook or follow us on Twitter for more sports updates. You can also download the NDTV Cricket app for Android or iOS.