MS Dhoni silenced his critics with three back-to-back fifties during the ODI series in Australia. 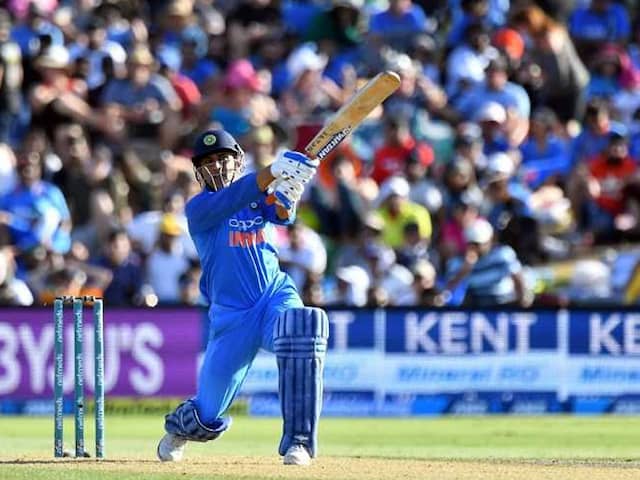 Mahendra Singh Dhoni, who missed out on the third and fourth One-day Internationals (ODI) against New Zealand due to hamstring injury, has been declared fit to play at Westpac Stadium in Wellington on Sunday. Ahead of the fifth and final match of the ongoing series that the visitors are leading 3-1, New Zealand all-rounder Jimmy Neesham heaped praise on MS Dhoni saying that "you don't have the game won until you have him out."

There were some serious questions raised on MS Dhoni's abilities as a batsman before he silenced his critics with three back-to-back fifties during the ODI series in Australia.

Even in New Zealand, MS Dhoni scored an unbeaten 48 and behind the stumps, he remains as sharp as ever.

"His record speaks for itself. He is a fantastic player. I know there were some noises in the Indian media if he should be in the World Cup squad or not. He has got that calm demeanour in the middle-order. When you are bowling to him, you know you have not got the game won until you get him out," Neesham added.

Talking about the final game of the ODI series, the New Zealand all-rounder, who is back after recovering from a hamstring injury, said he expects the ball to do a bit at the Westpac Stadium, like it did in Hamilton where India were bowled out for 92 before suffering an eight-wicket loss.

"We sort of got conditions (at Hamilton) which suit us a little bit more, there was more swing in the air for Boulty (Trent Boult). Anytime, if you can knock over a team like India for 90 odd, you will be happy.

"But you never know what you are going to get here as pitch conditions go but look, we know the conditions are going to vary in different parts of the country and the world. We want to be a team which can perform in all conditions."    The 28-year-old, who plays domestic cricket for Wellington now having moved from Otago, expects the Westpac pitch to help the pacers.

"I certainly prefer playing at Westpac because at the Basin Reserve (other venue in Wellington) you are just bowling into the wind everyday.

Virat Kohli has been rested from the final two ODIs and the subsequent T20I series but Neesham feels the visitors remain a formidable force.

"Their top three average 20 runs more than any other pair. They have a lot of quality at the top despite Virat being rested. For us, it (Kohli' absence) is certainly not a case of being complacent," Neesham said.

Dhoni's fitness is definitely a boost for India but New Zealand, who have already lost the series, will be hoping to end the five-match series on a high by winning on Sunday.

MS Dhoni Cricket New Zealand vs India, 5th ODI New Zealand vs India
Get the latest Cricket news, check out the India cricket schedule, Cricket live score . Like us on Facebook or follow us on Twitter for more sports updates. You can also download the NDTV Cricket app for Android or iOS.