India beat New Zealand by 35 runs in the fifth ODI to claim a 4-1 series win over New Zealand. 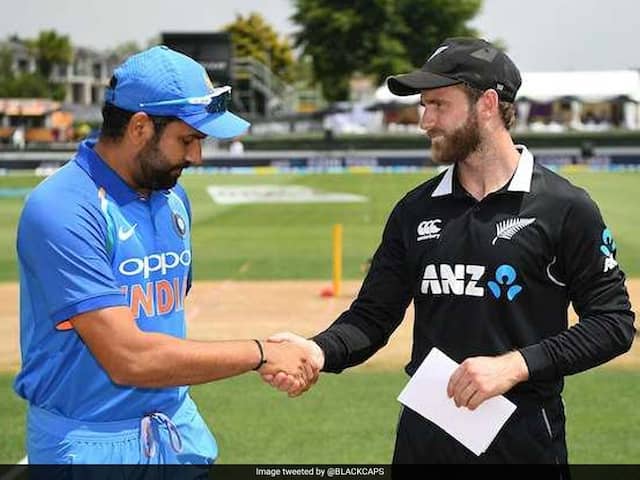 Kane Williamson admitted that India taught the hosts a few lessons in their own conditions.© BLACKCAPS/Twitter

Kane Williamson, New Zealand captain, was all praise for the Indian cricket team saying the "world class outfit" taught the hosts "a few lessons in our own conditions". India became only the third team after Australia (1999/00, 2004/05) and Sri Lanka (2000/01) to win a bilateral ODI series 4-1 in New Zealand. India dominated the five-match contest with the only blip to an almost perfect series coming in the fourth ODI in Hamilton. After the ignominy of being bowled out for 92 in the fourth match, India bounced back in style in Wellington courtesy fine performances from Ambati Rayudu with the bat and Yuzvendra Chahal with the ball.

After the 35-run win in the final ODI, the series ended 4-1 in India's favour, and host skipper admitted the tourists were the deserving winners.

"Credit to India throughout this series. They've taught us a few lessons in our own conditions. They're a world class outfit, they deserve the series win. We need to learn from these lessons. It's a game of pressure. Throughout this series, they had us under more pressure than we would've liked," Williamson said in the post-match presentation ceremony.

Led by a 113-ball 90 from Ambati Rayudu and a quickfire 22-ball 45 from Hardik Pandya helped India post 252 in 49.5 overs. Vijay Shankar too player a crucial knock, scoring 45 off 64 balls while Kedar Jadhav contributed 34 off 45 balls after the Indian top-order had failed to fire for the second match running.

Rohit Sharma (2), Shikhar Dhawan (6), Shubman Gill (7) and MS Dhoni (1) fell without making much of a contribution to leave India tottering at 18 for four. The middle-oder, however, came to the rescue and helped the tourists post a fighting total.

"It was very tough against a quality bowling attack. Was thinking we should take the game to 30th over without losing another wicket. Our only plan was to play the full fifty overs," said Man of the Match Ambati Rayudu.

New Zealand's top-order again crumbled leaving captain Williamson and Tom Latham to get the repair job done. They did so for a while to bring the hosts back to the contest but Chahal picked up some crucial wickets to leave the New Zealand chase in tatters.

In the end the hosts were bowled out well short of the target, giving India a convincing 4-1 win going into the three-match Twenty20 International (T20I) series, starting on February 6.

Kane Williamson New Zealand vs India New Zealand vs India, 5th ODI Cricket
Get the latest Cricket news, check out the India cricket schedule, Cricket live score . Like us on Facebook or follow us on Twitter for more sports updates. You can also download the NDTV Cricket app for Android or iOS.