Virat Kohli and MS Dhoni were spotted riding the segway after India's win over New Zealand in the first ODI in Napier. 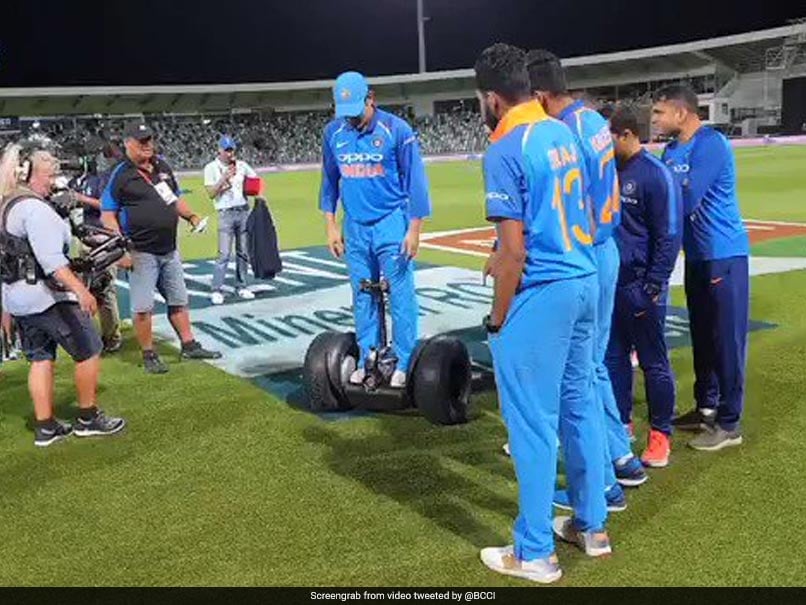 If MS Dhoni is fond of two-wheelers, Virat Kohli has a soft cornerfor swanky cars. But there's some sort of a vehicle both of them have developed a common love for. On Wednesday, after India clinched the first One-day International vs New Zealand in Napier, Virat Kohli and MS Dhoni were spotted riding the segway, which obviously made them seem cooler. In a video posted by the Board of Control for Cricket in India on Twitter, both Dhoni and Kohli can be seen enjoying a good time on the segway in Napier. The tweet reads, "Post-game shenanigans courtesy @msdhoni & @imVkohli. This looks fun."

Earlier on Wednesday, India crushed New Zealand in the first ODI but a bizarre and unprecedented sun-induced interruption overshadowed the on-field action. Entering the five-match rubber following maiden Test and ODI series triumphs in Australia, India signalled their intent with a clinical display, which saw them chase down a revised target of 156 by eight wickets in 34.5 overs. The Duckworth-Lewis method came into the picture for an interruption which was not caused by rain for the first time.
On a near-perfect day, the only thing that didn't go their way was the toss. But India made light of that by bowling out the home team for a paltry 157 in 38 overs. Wrist spinner Kuldeep Yadav was the most successful bowler, returning figures of 4/39 in 10 overs, while seamer Mohammed Shami finished with an excellent 3/19 in six overs. There were also two wickets for leg-spinner Yuzvendra Chahal. Captain Kane Williamson top-scored for the hosts with 64 off 81 balls. In response, Shikhar Dhawan began the innings with a flurry of boundaries, eventually finishing as the top-scorer with 75 off 103 balls.

MS Dhoni New Zealand vs India Cricket
Get the latest updates on Fifa Worldcup 2022 and check out  Fifa World Cup Schedule, Stats and Live Cricket Score. Like us on Facebook or follow us on Twitter for more sports updates. You can also download the NDTV Cricket app for Android or iOS.