During the interview on Chahal TV, Mohammed Shami was referred to as "Lalaji" by Yuzvendra Chahal. 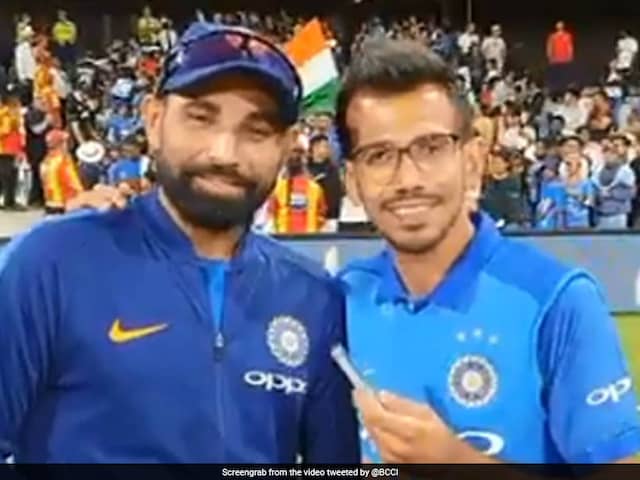 Mohammed Shami was adjudged player of the match for excellent bowling figures of 3/41.© Twitter

After Virat Kohli, Rohit Sharma and Kuldeep Yadav, it was Mohammed Shami's turn to set Chahal TV on fire. The Indian fast bowler, who was adjudged man of the match in the third One-day International versus New Zealand, opened up about the atmosphere in the Indian dressing room and bowling in tandem with Bhuvneshwar Kumar. But during the interview, Chahal referred to Mohammed Shami as "Lalaji". Here's the entire video where Mohammed Shami gets candid after guiding India to a thrilling 3-0 ODI series victory at Bay Oval.

CHAHAL TV: On our brand new episode of Chahal TV, we get in touch with India pacer @MdShami11. What is Shami's nickname in the side? @yuzi_chahal finds out #TeamIndia - by @RajalArora

Earlier on Monday, Rohit Sharma and Virat Kohli scored half-centuries and stitched a century stand for the second wicket to help India outclass New Zealand by seven wickets to take an unassailable 3-0 lead in the three-match One-day International (ODI) series. After opting to bat, New Zealand were bowled out for 243 in 49 overs. Ambati Rayudu, who was suspended for bowling by the ICC, was unbeaten on 40 and wicket-keeper Dinesh Karthik on 38 as India chased down the target with seven overs to spare.

Skipper Virat Kohli signed off his tour Down Under on a high with a first ODI series win in New Zealand in 10 years. However, it is to be noted that prior to this, India played just one series here since the one in 2009.

It was a complete team effort after the bowlers shot New Zealand out for 243 in 49 overs with all-rounder Hardik Pandya (2/45 in 10 overs) making his presence felt with the ball as well as on the field.

Pandya was playing his first match after the suspension on him for sexist remarks on a TV show was lifted.

New Zealand Cricket Team Cricket New Zealand vs India
Get the latest Cricket news, check out the India cricket schedule, Cricket live score . Like us on Facebook or follow us on Twitter for more sports updates. You can also download the NDTV Cricket app for Android or iOS.