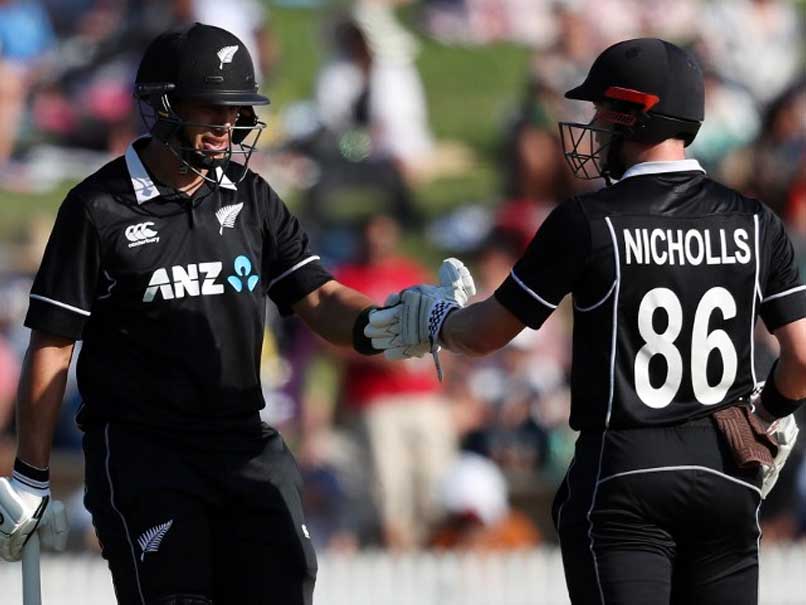 Trent Boult claimed a five-wicket haul as New Zealand thrashed India by eight wickets to claim a consolation win in the fourth One Day International at Seddon Park on Thursday. Ross Taylor scored an unbeaten knock of 37 runs and shared a match-winning 54-run stand with Henry Nicholls (30*) for the third-wicket after New Zealand bowled out India for paltry 92 runs in 30.5 overs. However, India are 3-1 up in the five-match ODI series. Rohit Sharma was leading the men-in-blue in his 200th ODI match and in the absence of talismanic skipper Virat Kohli.

With run-machine Kohli rested after the side claimed an unbeatable 3-0 lead in the five-match series, India's much-vaunted batting was dismissed for their seventh lowest ODI total.

India's 92-all-out was also the lowest total posted by any side on this venue, the previous lowest of 122 also against their name.

With the series already out of their grasp after India won the first three games, Boult wreaked havoc with the new ball and in Colin de Grandhomme's (3/26) company utilised the swinging conditions at the Seddon Park.

"Never expected this to happen. (But) games like this happen...We've got ourselves to blame for this," said India's stand-in captain Rohit Sharma.

In the absence of Kohli and an injured MS Dhoni, the Indian batting unit found the going tough against the Kiwi bowling attack.

India's lowest ODI total is 54 against Sri Lanka at Sharjah in 2000. It was also India's second lowest total in ODIs against New Zealand, having somehow managed to surpass the 88 scored at Dambulla.

Bowling his 10 overs at a stretch, Boult troubled the Indian batsmen with both ways movement to return with impressive figures of 5 for 21, while Grandhomme gave him perfect support from the other end after New Zealand won the toss and elected to bowl.

While chasing, even though New Zealand lost Martin Guptill (14) and skipper Kane Williamson (11) early to Bhuvneshwar Kumar (2/25), the hosts completed the formalities in 14.4 overs with eight wickets in hand.

Henry Nicholls (30 not out) and Ross Taylor (37 not out) then completed the easy task for the Kiwis without any further damage.

Earlier, the pitch didn't seem unplayable but the Indian batsmen failed to apply themselves against the swing bowling of Boult and Grandhomme.

Dhawan's search for big runs continued and he was the first to depart, caught plumb in front of the wicket by Boult in the sixth over.

Rohit didn't have a happy outing on his 200th ODI and was caught by Boult off his own bowling an over later. Grandhomme then joined the party and dismissed both Ambati Rayudu and Dinesh Karthik for ducks in a span of four balls in the 11th over.

A lot was expected from debutant Shubman Gill (9) but pressure got the better of him as he got out like Rohit, caught by Boult off his own bowling.

Reeling at 33 for 5, India desperately needed the experience of Kohli or Dhoni to bail the team out but in the duo's absence, the onus was on Pandya and Kedar Jadhav to do the repair job.

But it was not to be as wickets kept tumbling with Boult ripping apart India's line-up, dismissing both Jadhav and Pandya in quick succession.

Struggling at 55 for 8, Chahal and Kuldeep shared 25 runs for the ninth wicket to take India close to the 100-run mark before being shot out in 30.5 overs. The mast match of the series is on Sunday in Wellington.

Rohit Sharma Cricket New Zealand vs India New Zealand vs India, 4th ODI
Get the latest updates on India vs South Africa and check out  Schedule, Results and Live Score. Like us on Facebook or follow us on Twitter for more sports updates. You can also download the NDTV Cricket app for Android or iOS.