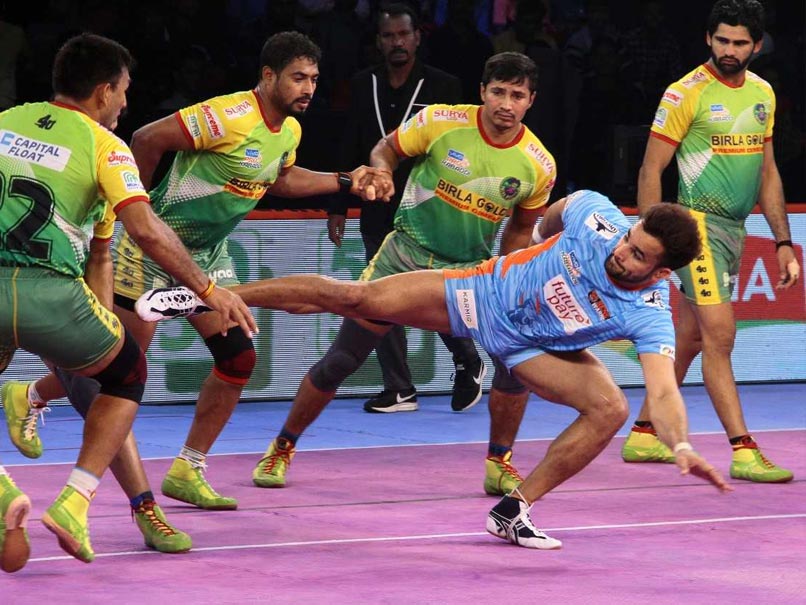 Defending champions Patna Pirates roared back again in style as they outclassed Bengal Warriors 50-30 for the second time in the Pro Kabaddi League (PKL) Season 6 at the NSCI stadium in Mumbai on Saturday. Skipper Pardeep Narwal and Deepak Narwal collected 10 raid points each to outclass their neighbours in the East India derby. Bengal's raiding department couldn't create their magic as they got only 17 points compared to 28 points by Patna. In the other match of the day, Gujarat Fortune Giants registered a narrow 38-36 win against U Mumba in a thrilling contest.

Earlier, in the first match Jaideep got a High 5 to ensure the defensive supremacy of Patna over Bengal. Maninder Singh was thoroughly neutralized by Patna's defence as he got 6 points in his 18 raids.

Bengal Warriors started with 5 defenders and 2 raiders with Ran Singh playing the dual role for them and wanted to get their payback on Patna who defeated them 29-27, the last time they met.

Ravinder Kumar got Jang Kun Lee in the 2nd minute after his successful bonus attempt to open the scoring for Patna.

Baldev Singh created nuisance for Patna's raiders with assistance from Adarsh T as seen in the 4th minute when he got Deepak Narwal in a dash to make it 4-3 with Patna still leading.

Patna were reduced to 3 men after a few unsuccessful raids by them but caught back when Kuldeep Singh got a strong ankle hold on Maninder to get a Super Tackle in the 9th minute and make it 7-6.

Deepak Narwal then got the important Surjeet Singh and in-form Baldev Singh to make it 9-6 in the next raid.

This led to Bengal conceding an All Out in the 14th minute as Jaideep did a strong block on Jang Kun Lee to take their lead to 16-8.

Maninder got Vikas Kale after his dangling leg just crossed the midline to make the score read 21-12.

The half ended with Patna leading Bengal 22-14.

Patna Pirates continued their supreme domination in the second half getting their lead swelled to 24-14 in the 22nd minute.

Pardeep Narwal got rid of both the corners of Bengal, Baldev Singh and Adarsh T, in his 25th minute Do-Or-Die raid to make it 28-14 and stop their tandem for a few minutes.

This led to Bengal conceding another All Out in the 26th minute as Surjeet Singh had to concede a surrender raid to Pardeep Narwal to make it 32-14.

Maninder was constantly neutralised or kept silent with empty raids in the match. This could be observed by the way he became a victim of Vijay's double thigh hold that looked more like a short block on him to make it 35-17 in the 31st minute.

Pardeep Narwal slowly increased his points tally as he got Baldev Singh trying a waist hold from behind his back unsuccessfully in his 33rd minute Do-Or-Die raid.

A great pursuit raid by Pardeep Narwal saw him get a running hand touch on Maninder which then led to Patna inflict another All Out on Bengal in the 36th minute to make it 45-18.

Bengal then got an All Out on Patna in the 38th minute when they got Deepak Narwal but it was too late as Patna was still on a 20-point lead with the score reading 47-27.

Patna managed to grab a few more points towards the end to comprehensively pocket the tie.